Advertisement
Over 1400 TV talkshow Ellen fans gathered outside the Sydney Opera House on Tuesday for a live broadcast to the USA's Ellen DeGeneres show.

Over 1400 TV talkshow Ellen fans gathered outside the Sydney Opera House on Tuesday for a live broadcast to the USA’s Ellen DeGeneres show.

The crowd gathered showing Ellen just the kind of warm welcome she’ll be getting when she arrives here in March for a series of events and appearances. 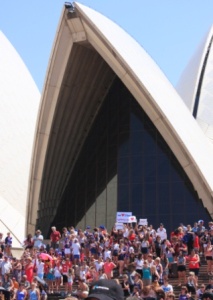 A huge crowd answered the call to come to the Sydney Opera House with their passport and a packed bag to win a trip to the Ellen DeGeneres show.

The fans thronged to the Opera House, following a call out from the talkshow host, asking fans to pack their bags and be ready to be whisked away by Qantas on a flight to Hollywood, with DeGeneres’ crew as chaperones on their return journey from a scouting mission ahead of her March visit. 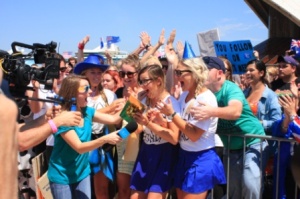 Two lucky fans won a trip to LA to meet Ellen prior to her Australian arrival.

With signs, costumes, songs and a few dances, the Sydney fans showed their enthusiasm for the forthcoming visit, with two lucky fans winning a trip to LA to meet Ellen ahead of her visit to Australia. Images courtesy of Destination NSW.

The footage filmed from Sydney will broadcast on Channel 9 later this week.