Advertisement
British Airways is set to roll-out its new First Class on Australian flights by March 2012, the same time that the airline will make significant changes to its services down under.

British Airways is set to roll-out its new First Class on Australian flights by March 2012, the same time that the airline will make significant changes to its services down under. 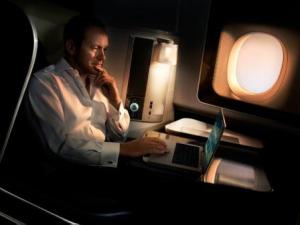 As part of a new agreement with Qantas, British Airways will no longer fly between Bangkok and Sydney, but in return the flying kangaroo will no longer operate from Hong Kong or Bangkok to London, two routes that will become code-share services on BA.

The change will see the return of Boeing 747-400s on Singapore-Sydney flights and onboard will be the new First cabin, which has been created by British Airways at a cost of GBP 100 million.

In a move flagged earlier this year during an exclusive interview with HM at London Heathrow, the introduction of the new First Class ups the ante on flights between Sydney and Singapore – a route that already has new premium product onboard Qantas and Singapore Airlines flights.

The new First Class features an enhanced fully-flat bed seat, that when reclined is 60% wider at the shoulders than the existing bed and features a new “intelligent” mattress, according to the airline.

Fine, 400-thread Egyptian cotton bed linen is used on the beds, giving customers a feeling of being in a flying hotel as opposed to being onboard a Boeing 747-400.

“We have contemporised First and created an intimate private jet experience onboard,” said British Airways’ Head of Customer Experience, Mark Hassell. “We have resisted gadgets and gimmicks and focused instead on simplicity and quality.”

First Class ‘suites’ also feature a personal wardrobe, a writing desk that can be converted into a dining table, 15” TVs featuring audio and video on demand, mood lighting and electronic blinds.

The new First Class Suites will also be available on British Airways’ flights from Hong Kong to London – services that connect from Qantas flights.