Advertisement
Accor has signed two key New Zealand hotels - Hyatt Regency Auckland and Hotel So in Christchurch - in a move that will make the company the country's largest accommodation chain.

Accor has signed two key New Zealand hotels – Hyatt Regency Auckland and Hotel So in Christchurch – in a move that will make the company the country’s largest accommodation chain. 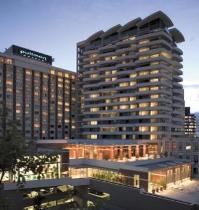 From January 2011, the 267-room Hyatt Regency Auckland will become New Zealand’s first Pullman Hotel, while the 284-room Hotel So will become All Seasons Christchurch Cashel Street.

Accor Vice President New Zealand, Paul Richardson, said the two properties would not only boost the chain’s offering, but aide international tourism, particularly with the arrival of the Pullman brand.

“The launch of a new international brand always provides impetus for a city’s tourism infrastructure,” he said.

“The Hyatt has built-up an excellent reputation over the years and we believe that Pullman, with its dynamic global growth potential, can really add significantly to add to the hotel’s and Auckland’s tourism potential.

“The Asia Pacific region is a key future market for growing New Zealand’s inbound tourism, and with Accor boasting the largest network of hotels in the region and with Pullman growing so rapidly, we will be able to play a major role in promoting Auckland as a destination for business, leisure and conference travellers.

“It will also provide great opportunities for staff. Joining a network of over 400 hotels in Asia Pacific and 29 in New Zealand means they will be able to develop their careers far more easily within the one hotel group.

“We look forward to working with all our partners in the industry to ensure a very smooth transition to the new Pullman brand,” he said.

In 2009, Hyatt Regency Auckland underwent a NZD$7 million refurbishment of all guest rooms, as well as an upgrade of some public areas and back-of-house facilities.

Richardson said the addition of Hotel So was instrumental in the growth of Accor’s economy sector hotels.

“Accor is the world’s leading operator of economy hotel brands and with the re-branding of the hotel to All Seasons we believe we can attract a more extensive market from both within New Zealand and internationally,” he said.

“All Seasons is already a prominent hotel brand in Australia and has been operating in Auckland for a few years now, and globally it is expanding rapidly in key source markets for New Zealand such as Britain, France, Germany, the Netherlands and Italy. The brand is also set for major growth in Asia.

“It is an excellent hotel for the Christchurch market because it can cater for such a wide range of guests in a central city location.

“The new branding will help contribute to Christchurch’s tourism recovery since the earthquake disrupted the city in September and give impetus for 2011.

“With new airline services, the Rugby World Cup and a still-attractive exchange rate we are very optimistic about future prospects for the Canterbury region,” Richardson said.