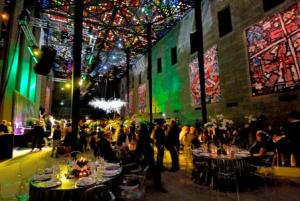 “We are absolutely thrilled with this acknowledgement,” said Brian Leyden, CEO of Peter Rowland Catering.

“In our 50 years of being in business we continue to raise the benchmark in food and service to exceed our customers’ expectations – whether that’s at public venues such as NGV International, at major sporting events, for private functions or in our commercial sites.”

In the midst of one of its busiest seasons, The Peter Rowland Catering team recently catered for the Australian Motorcycle Grand Prix in Phillip Island and is gearing up for its major annual event – Melbourne Cup Carnival which commences this Saturday.

“2011 has been a milestone year for Peter Rowland Catering with its expansion into Canberra, catering at the National Museum of Australia and significant growth in its commercial catering division recently commencing at The Department of Prime Minister and Cabinet in Canberra and Australian National Unity in Melbourne,” said Leydon.

Peter Rowland Catering has had a long-term partnership with the National Gallery of Victoria, managing all dining outlets at NGV International such as catering at the popular function venue The Great Hall, Persimmon restaurant  and The Ian Potter Centre: NGV Australia.