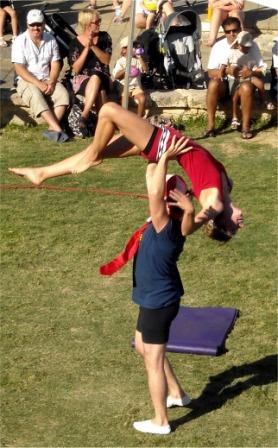 The Ayers Rock Surf Lifesaving Club – homegrown
Fremantle talent on the Cicerello’s pitch.
The Fremantle Street Arts Festival attracts a host of local, national and international acts delivering everything from acrobatics, juggling and magic to snake charmers, street theatre and more. It has grown into Australia’s largest street performance festival over the past decade, originally starting as a way of celebrating Fremantle’s unique busking culture.
Cicerello’s owner Henry Liascos said the festival always made the area come alive, attracting people from near and far to enjoy the event.
“It gives both the Cicerello’s restaurant and surrounding Fishing Boat Harbour area a real vibrancy and energy, as it does right across Fremantle,” Liascos said, singling our the vaudeville-style of ‘The Ayers Rock Surf Lifesaving Club’ as a great new addition to the event.
“It’s always good to have a mix of homegrown talent with other world-class performances on the Cicerello’s pitch, matched with enthusiastic crowds and almost perfect weather right across the weekend.
“Having that lively festival atmosphere in the Mews Park area next to Cicerello’s really was an added attraction, thanks to the mix of performers on show,” he said.
For more information on the Fremantle Street Arts Festival, click here.
For information on Cicerellos click here.
Or to see The Ayers Rock Surf Lifesaving Club at your event, click here.