Advertisement
Sydney Festival has recently announced that The Keystone Group will join its stable of more than 80 partners and sponsors as the naming rights sponsor for Keystone Festival Bar at Hyde Park Barracks. 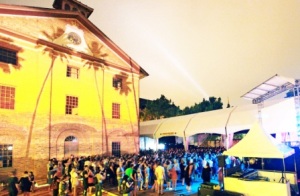 Keystone Hospitality will join the team of sponsors at the 2012 Sydney Festival as the naming rights sponsor for Keystone Festival Bar at Hyde Park Barracks.

Deemed to be a stalwart favourite amongst music-lovers and a regular late-night drop-in for Festival artists, The Festival Bar would serve as a great venue with plenty of room both on the canopied dancefloor and under the night sky and a promising line-up of live bands and DJs making it one of the Festival’s coolest venue.

“January in Sydney, around the world, is the place to be. Keystone recognises this, and puts it down to three things: the fireworks, the weather and Sydney Festival!” said Paul Schulte, group director, The Keystone Group.

”We are truly excited to have such a large-scale part in the event, especially when it’s something that represents all our bars so well.

”The team at Sydney Festival have a creative flare and ‘a love’ for thinking outside the box.

We saw it as a very comfortable match to what we are creating in our venues every day,” said Schulte.

“The Keystone Festival Bar is a Festival favourite for tens of thousands every January, making it one of the centrepieces of the Festival. As a late-night live music venue as well as a meeting place for Festival artists and fans alike, it makes sense to team up with one of Sydney’s leading venue and hospitality companies. The line-up for the 2012 Keystone Festival Bar will have an incredibly wide range of music from hip-hop to funk with artists from the USA, UK, Japan, Africa and France.” said Malcolm Moir, Sydney Festival’s head of business development

Around 650,000 people enjoyed the 2011 Sydney Festival, which included 109 events with 338 performances and 17 free events throughout the city, and contributed $50.2m to the NSW economy.