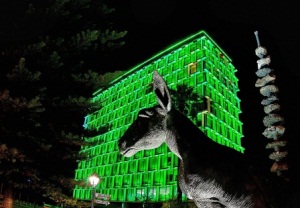 Joining the greening initiative for the first time ever was, The Hyde Park Barracks in Sydney, one of the Historic Houses Trust Museums, which has a special significance to both the Irish and Australian communities, since it played an integral role in both the forced and free emigration of Irish to Australia. It was bathed in green light from 14th-17th March.

Two other Perth based buildings also joined the greenings as first-timers; the Bell Tower and Council House. 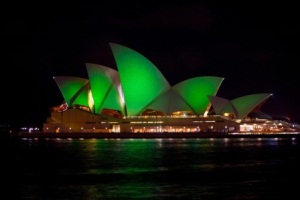 For the third time the Sydney Opera House was lit up in green on St. Patrick’s Day.

Other newcomers that went green for the first time included the Pyramids of Giza and the Christ the Redeemer statue in Rio de Janeiro in Brazil. The famous ‘Welcome’ sign in Las Vegas, the Little Mermaid in Copenhagen, HMS Belfast in London, City Hall in Houston, Texas, the Citadel in Jordan, the Tower of Hercules (a UNESCO World Heritage Site in Galicia in Spain), and the futuristic new EYE Film Institute in Amsterdam. 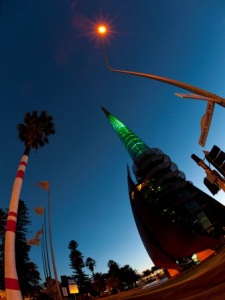 Perth’s iconic Bell Tower was the second WA venue to participate this year.

The new sites joined some ‘old favourites’ which have gone green in previous years on 17 March – including Niagara Falls, the Leaning Tower of Pisa, the Prince’s Palace of Monaco, Burj al Arab in Dubai, Table Mountain in South Africa, the Empire State Building in New York, Burg Theater (City Hall) in Vienna, the Sky Tower in New Zealand and the TV tower in Berlin’s Alexanderplatz.