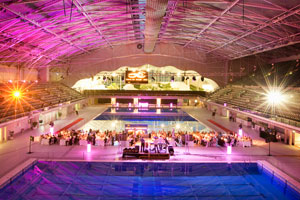 
As the athletes and guests arrived at the Aquatic Centre, they were greeted by a complete transformation of the pool area into the scene of a glittering gala dinner.  Pre drinks were served poolside next to a spectacular illuminated bar.

MC Nicole Livingstone invited the guests to make their way to their seats where the atmosphere was set with crisp white linen, mirrored tabletops and remarkable lighting from 32 Hundred.

The Path of Champions is a major attraction at the forecourt of the Aquatic Centre. At the last update following the 2004 Olympic Games, it consisted of 125 plaques.

To visit the site contact the events supervisor at Sydney Olympic Park Aquatic Centre on 02 9752 3666.