Advertisement
The Southern Star observation wheel has opened with a bang in Melbourne on Saturday (20 December) as the city's latest tourism attraction.

The Southern Star observation wheel has opened with a bang in Melbourne on Saturday (20 December) as the city’s latest tourism attraction. 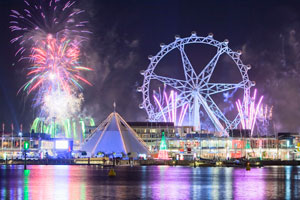 The Southern Star observation wheel opened with a bang.

Located at Waterfront City in Melbourne Docklands, the Southern Star is the first giant observation wheel to be built in Australia. The uniquely designed wheel is formed in the shape of the seven-pointed Federation Star and stands 120 metres high with 21 cabins holding up to 20 people per cabin.

The 30 minute flight experience will run year-round and cost $29 per adult and is also available for private hire for special events.

At the base of the wheel, the 3-level Star Building and function centre provides retail space, cafes and the Star Room which holds up to 400 for cocktails or over 200 for sit-down functions. There are also two private boardrooms. Star Room guests receive special VIP access to their Southern Star flight.