The construction of Melbourne’s new Southern Star Observation Wheel in Docklands is progressing and an opening timeline will be announced soon, says Southern Star Management Group.

The Management group announced this week that an opening date will be announced when installation of the 21 cabins begins, adding that  a series of “exciting announcements” would be made in the months leading up to the opening. 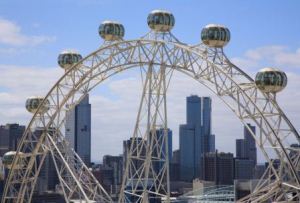 When it opens, the new Southern Star will be one of only three Giant Observation Wheels in the world and the only one in the Southern hemisphere.

With a maximum height of 120 metres, the Star will offer 360 degree views over the Docklands precinct, the city and surrounding areas, including Port Phillip Bay, and as far as Mount Macedon and the Dandenong Ranges.

Southern Star Management Group said significant product enhancements were being undertaken during the new build that would ensure the Southern Star provided a compelling and unique way to discover and experience Melbourne, with details to be announced as the opening approaches.

Melbourne’s ‘Venue with a Difference’, the Southern Star will have dedicated function space capable of hosting large and small gatherings, from cocktails for 400 guests to a sit-down dinner for up to 250 people and business meetings for between 14 and 300 guests. The Star Piazza, surrounding the base of the Star, will have the capacity to host a cocktail reception for up to 1500 people, making it one of Melbourne’s largest open-air event venues.

Southern Star Management Group said the new Southern Star would be the first significant tourism attraction to open in Melbourne for five years and, with its striking scale and innovative design, will become a vibrant addition to the Docklands landscape as well as adding further support to Melbourne’s meetings and incentives market.