Advertisement
The 7th IAS Conference will be taking place in Kuala Lumpur in two weeks time, bringing an expected 4,000 delegates to the destination.

The 7th IAS Conference on HIV Pathogenesis, Treatment and Prevention 2013 (IAS 2013) will be taking place in Kuala Lumpur in two weeks time, bringing an expected 4,000 delegates to the destination.

Organised by the International AIDS Society (IAS) in partnership with the Centre of Excellence for Research in AIDS (CERiA) and University of Malaya, the conference is also strongly supported by the Malaysia Convention & Exhibition Bureau (MyCEB). 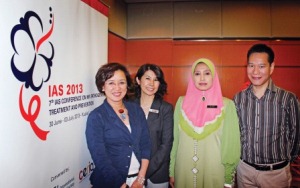 Heavily supported by MyCEB, the 4,000+ delegate convention is expected to bring a huge boost to the destination.

The IAS Conference is the world’s largest open scientific conference on HIV and AIDS which represents an ideal platform for the examinations of the latest development in HIV-related research. The conference, which will be attended by leading scientists, clinicians, public health experts and community leaders from around the world are expected to bring more than 4,000 delegates into Malaysia. This would generate approximately RM55.8 million in economic impact for the country. This is also the first time that the IAS Conference will be hosted in Asia.

A recent marathon meeting by the IAS 2013 organisers in Kuala Lumpur has also consolidated the programme for the conference, putting a step forward to the materialised date. The meeting was also attended by Professor Françoise Barré-Sinoussi, International Chair of IAS 2013, IAS President and Nobel Laureate for her discovery of the HIV virus. She will be one of the key speakers at the conference.

“MyCEB is honoured to be a part of the supporting organisations of the IAS 2013. Not only will it provide Malaysian stakeholders the opportunity to discuss the epidemic on a global platform and raise the challenges specific to Malaysia itself, the conference also represents another milestone for Malaysia as the preferred destination for global health and medical conventions. Last year, Malaysia hosted the 43rd Union World Conference on Lung Health and this year, Malaysia hosted the 9th International Symposium on Antimicrobial Agents and Resistance (ISAAR 2013) as well as the Women Deliver 3rd Global Conference (WD 2013),”commented Ms Ho Yoke Ping, the general manager, sales and marketing of MyCEB.

Health care has been identified in Malaysia’s progressive Economic Transformation Programme (ETP) as a National Key Results Areas (NKRAs) and in line with this, MyCEB is constantly active in pursuing and bidding for more medical meetings to be hosted in Malaysia. The current record shows that medical meetings top the list of business events in Malaysia, with 15 percent of International Congress & Conventions Associations (ICCA) events in the country being medical sciences events. Other medical events supported by MyCEB last year include 14th Congress of the International Society for Peritoneal Dialysis 2012 and 14th Asia Pacific Congress of Pediatric & 4th Asia Pacific Congress of Pediatrics Nursing.

IAS 2013 will be one of the key business events and is part of the Bureau’s endeavour to proactively support Tourism Malaysia’s Visit Malaysia Year 2014 campaign as the country look towards welcoming the targeted 28 million tourists into Malaysia.