Advertisement
Fresh, evocative and reflecting the destination's renewed energy, optimism and confidence is how Brett Jeffery of Events & Venues Rotorua, describes the new look that has recently been incorporated into promotional material for Rotorua's Energy Events Cen

Fresh, evocative and reflecting the destination’s renewed energy, optimism and confidence in its ability to host major upscale conferences and conventions. That’s how Brett Jeffery, sales and marketing manager for Events & Venues Rotorua, describes the new look that has recently been incorporated into promotional material for the two major venues he sells on behalf of Rotorua – the Energy Events Centre and the Rotorua Convention Centre. 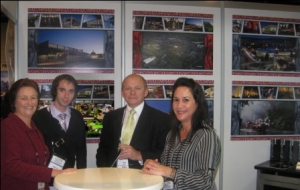 Launched earlier this year at the MEETINGS 2010 convention and incentive tradeshow in June under the tagline ‘Two convention centres, one iconic destination’, the new look can already be seen on the website, advertising and giveaway notebooks.

Jeffery says the time is right for a fresh look to go with fresh thinking inspired by their renewed enthusiasm and confidence in the ability to attract major Australasian conference and incentive business due to the magnificent venues, facilities and infrastructure available – and the fact that Trans-Tasman air services are a reality.

“We’ve been promising the Australian market a direct link for a number of years. With Air New Zealand services in place since December 2009, we finally have the long-awaited international connection we so badly needed,” says  Jeffery. “I’m convinced we’ve yet to reap the huge benefits direct Sydney-Rotorua flights will bring, especially since we are able to link it to the country’s largest convention centre (the 8255sqm Energy Events Centre).”

The new style is drawn from two key design elements that are part of the stunning $28m Energy Events Centre, which opened in 2007; an imposing illuminated fibreglass Maori pou (totem pole) in the Wai Ora Spa Grand Hall and a magnificent red abstract wall design representing the region’s 16 lakes featured in the BayTrust Forum, the main plenary section of the building. These elements are complemented by modern, funky fonts, red and black colours depicting the destination’s strong ties with Maori culture and angled imagery (a mix of stunning destinational and inspirational venue shots) symbolising the cutting edge approach available to clients.