Advertisement
Tourism Wollongong has launched an industry first. A brightly painted van to take their tourism message to the people.

Tourism Wollongong has launched an industry first – a brightly painted van to take their tourism message to the people.

Crammed with travel brochures and crewed by visitor information staff armed with laptops capable of pulling information and images in from a central data base, the Hyundai Imax will travel to wherever people gather – at lookouts, sporting events, on any of the city’s 17 patrolled beaches. 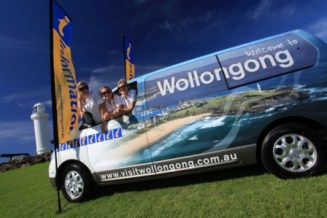 ”’Anywhere, any place, any time’ is our credo for the van,” said Tourism Wollongong Chairman Matt Davidson as he watched the unveiling atop Wollongong’s picturesque Flagstaff Hill earlier this week.

He said the would become a mobile arm for the city’s new $11m Southern Gateway Visitors Centre, opened at Bulli Tops late last year to promote a Wollongong holiday experience to travelers on the busy Southern F6 Freeway.

“The centre and van illustrates our commitment to establishing Wollongong and Grand Pacific Drive as a tourism mecca and the message we want to share is ‘we love the Gong, so come and visit’.”

“With another two new hotels due to open here this year, Wollongong is on a roll and we want everyone to know more about us,” he said.