Advertisement
The Square at the newly refurbished Palace Hotel in Sydney's Haymarket is gaining popularity on Sydney's live music scene as a venue for events of up to 200.

The Square at the newly refurbished Palace Hotel in Sydney’s Haymarket is gaining popularity on Sydney’s live music scene as a venue for events of up to 200 people. 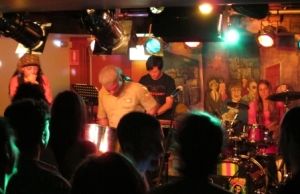 Located on Hay Street in the basement of the Palace Hotel, this live music and performance venue, has already attracted a strong lineup of the best Indie Rock and Punk bands from Australia and overseas.

According to Palace Hotel general manager, Marcus van Vogt, many established and up-and-coming bands have been complaining about the lack of venues in Sydney in which to play.

“We saw this as an ideal opportunity to support local musicians by providing a new performance space to showcase all styles of original live music in a comfortable atmosphere,” he said.

“It’s not only a great venue with a fully installed sound and lighting system as well as a live recording facility, The Square is in a great location in the middle of the city and close to all public transport.”

Many international and local bands have chosen the Square for their shows and The Hotel is also a popular dining and entertainment choice for Sydney’s business crowd, theatre goers attending the neighbouring Capitol Theatre and tourists in the CBD.

A major refurbishment undertaken by the venue’s owner, Metro Hospitality Group, last year, has transformed the hotel into a stylish and contemporary venue
while still paying homage to the heritage of the area, particularly the old Palace Hotel which once occupied the site.

The refurbished Palace Bar serves a wide range of craft beers on tap and in the bottle, while an all-day bar menu is available.

Away from George Street, a contemporary brasserie with seating for 118 patrons forms the heart of the venue. New chef Andy Yang, previously head chef at Bird Cow Fish in Sydney, has created a Brasserie menu that includes light meals to tempt pre-theatre patrons as well as hearty fare for its business clientele.