Advertisement
Minister for Tourism and Major Events, George Souris, has announced that Sydney would be the home of a new international garden show for the next three years, which will attract gardener enthusiasts and horticulturists from around the world.

Minister for Tourism and Major Events, George Souris, has announced that Sydney would be the home of a new international garden show for the next three years, which will attract gardener enthusiasts and horticulturists from around the world.

To be known as the Australian Garden Show Sydney, this new major event for NSW will be held in the stunning surrounds of Centennial Park this September. 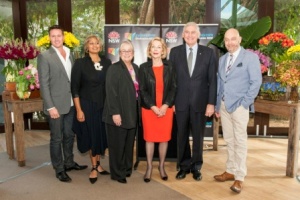 Representatives for the show, Sandra Chipchase, Minister Souris and special guests at the announcement.


“The inaugural Australian Garden Show Sydney, which will herald the start of the 29 various floral and garden shows that take place each year throughout regional NSW,” Souris said.

“The Australian Garden Show Sydney, to be held from 5-8 September, will become a keystone event on the NSW Events Calendar and is estimated to contribute at least $12 million to the State’s economy over the next three years.

“It is designed to encourage new gardeners and garden enthusiasts to explore the best garden, flower and landscape design in NSW

“It will also highlight the extraordinary diversity of gardening, landscape design and flower festivals in NSW by promoting more than 29 regional garden festivals, including the Hunter Valley, the Blue Mountains, the Southern Highlands and the South Coast”.

The Australian Garden Show, which was secured by Destination NSW and is exclusive to NSW, will set a new standard for horticultural events. Feature displays of the Show will include designs from well renowned TV personality and author of The Edible Balcony, Indira Naidoo and renowned curator Andrew Fisher Tomlin, six times winner of the UK Garden Designer of the Year Award.

Designed to create an entertaining and educational experience for visitors, the Australian Garden Show Sydney will feature floral pavilions and display spaces created by floral societies and associations, florists and nurseries from NSW, interstate and overseas.

“With NSW featuring the best regional flower and garden festivals on VisitNSW.com, visitors will be able to enjoy the Australian Garden Show Sydney and explore our wonderful regional shows across NSW.”

One thought on “Sydney to host International Garden Show”