ISES Melbourne Chapter staged their annual ISES Student Conference in late May (23 May) at the luxurious Sofitel Melbourne on Collins .

In its fourth year, the innovative and interactive conference attracted 500 event students from various educational institutions across the State. With a theme of “Only Live Gives You Five”, students were taken on a sensory packed journey as the conference explored the concept that only live events can engage all five senses. 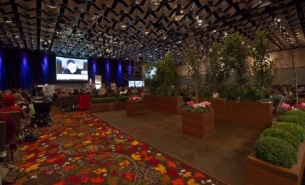 Over 500 event students filled the Sofitel Melbourne on Collins’ ballroom for the ISES event. 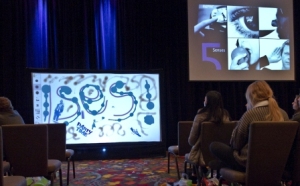 The event set out to engage all five senses of attendees using pop-up gardens, an electronic graffiti wall and more.

Officially opened by The Right Honourable, the Lord Mayor, Robert Doyle, students were welcomed by the general manager of the Sofitel Melbourne on Collins, Clive Scott.

A purposely picked young and trendy group of speakers interacted with and entertained the crowd. Megan Adams of Atlantic GroupV, wowed attendees with her presentation and accumulated a group of young fans evidenced by the queue surrounding Megan at the end of the conference.

ISES Melbourne Chapter displayed its International connections with a live SKYPE to New York and a presentation by Mark Shearon from the Proscenium Group and director at large on the ISES New York Chapter Board. 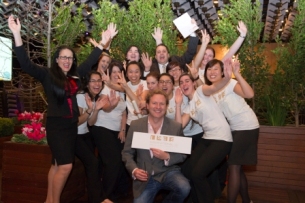 Brad Hampel of Solution Entertainment and Barney Withers of Haycom AV engaged the crowd with their futuristic, energetic and innovative presentations and electronic graffiti wall.

The event delivered beyond the expectations of the ISES Melbourne Chapter Student Conference Committee, consisting of Gian Blundo – president, Jon Hopwood – VP Events and Yvonne Wilson – Secretariat and continues to build on its success year after year.

“We’re proud to be supporting ISES in providing a conference where students have the unique opportunity to network and learn from those in the events and hospitality industry” says Mark Ashburn, of Recruitment Super.