Advertisement
Eventbrite has partnered with Facebook and Spotify to launch a new event discovery and ticket buying facility in Australia. 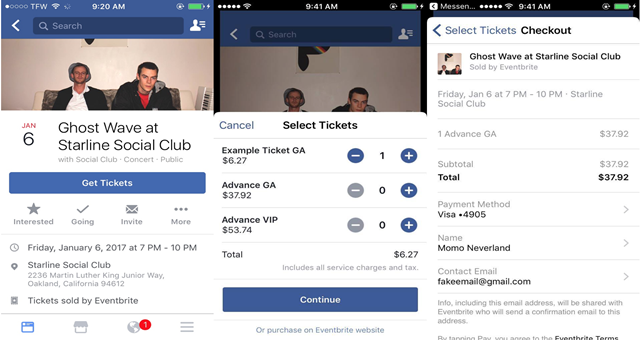 Eventbrite has partnered with Facebook to launch a new event discovery and ticket buying facility in Australia.

The new tool – which is the first of its kind in Australia –  will allow users to buy tickets directly within Facebook, without having to leave the site or app.

Commenting on the new integration, Eventbrite GM Phil Silverstone said: “Facebook’s apps are some of the most-used in the world, and meeting consumers where they are already spending a significant amount of their time online is vital for providing a seamless user experience”.

“By introducing a distributed commerce model into Australia’s ticketing landscape, Eventbrite is marking a line in the sand that signals a fundamental shift in the industry.”

“We’re bringing openness to the market that puts the customer at its core: we’re helping event organisers sell more tickets by making them available to purchase where their audiences already are,” Silverstone said.

In the US, where the integration is already available, events published through organisers’ Facebook pages are driving twice as many ticket sales and registrations than events that redirected out of Facebook to a ticketing page.

“With less hoops for consumers to jump through when buying a ticket  — multiple pages, new windows and forms to fill in —  people are far less likely to abandon their order, reducing drop-off and increasing organiser revenue,” the company said.

“We’ve gotten great feedback from our partners that are posting on Facebook helps them drive sales and attendance.”

Eventbrite has also announced a new global integration with Spotify today, meaning the music streaming app will now recommend Eventbrite events to its 100 million plus listeners based on their music preferences and alongside their favourite artists and albums.