Advertisement
The Lord Mayor's Business Awards held on Friday, October 15, featured a first for Queensland with a dynamic stage set created for the opening performance which included a projection mapping of key building's in the Brisbane city skyline.

The Lord Mayor’s Business Awards held on Friday, October 15,  featured a first for Queensland with a dynamic stage set created for the opening performance which included a projection mapping of key building’s in the Brisbane city skyline.

The awards held at Brisbane’s Convention and Exhibition Centre were managed by boutique event organisation LOUD Events who conceived the concept and engaged The Division to bring the idea to life. 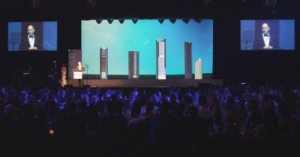 A recognised angle of Brisbane’s CBD was photographed and LOUD selected six of the most prominent buildings to construct. The Division then utilised high definition projection and custom animation to ‘construct’ the buildings live on stage integrating a custom build stage set together with projection mapping including an active Clem7 tunnel dug through the front of the set.

The city was brought to life with cars streaming through the tunnel, set to a giant backdrop running timelapses of rushing clouds, starfields and fireworks, in an innovative collaboration between LOUD events and The Division.

Daniel Graetz, director, The Division said the technique was new for live art installations and events.

“One of the most groundbreaking elements of this show was synchronising the content on the main screens with the live set,” he said. “The opening documentary and each award category were showcased on screen and animated at the same time on the seemingly living city set and
backdrop. 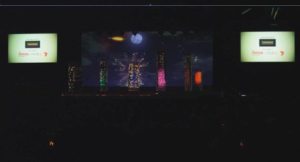 The city was brought to life throughout the event through timelapse of rushing clouds, traffic, fireworks and more

“We were pushing the boundaries of live audio visual integration but this is just the tip of the iceberg in terms of what can be achieved. By building a custom set and animating it with a range of media, the awards offered an immersive experience for guests and greater exposure for sponsors, nominees and winners.”

The Awards recognised the companies and individuals who have significantly contributed to Brisbane’s economy said Lord Mayor Campbell Newman.

There were seven business and two individual award categories featuring finalist companies from a range of competitive industries such as ICT, mining technology, infrastructure and construction, and education. Each of the 10 Award categories was judged by a panel of four local business and government leaders. These 40 leaders have made a resounding impact in their respective sectors, bringing a tremendous amount of global experience and expertise to the Awards.