One of Australia’s favourite horses Takeover Target stormed Sydney’s Bondi Beach to launch the 2012 BMW Sydney Carnival with some of the country’s leading racing stars and Minister for Tourism, Major Events, Hospitality and Racing, and Minister for the Arts, the Hon. George Souris.

“Sydney Carnival is a highlight on Australia’s racing calendar, held in the birthplace of Australian racing in Australia’s leading events and tourism city,” Minister Souris said.

“The NSW Government through Destination NSW has joined with Racing NSW, the Australian Turf Club, Tabcorp and Inglis to reconfigure the BMW Sydney Carnival as a signature event on the NSW Events Calendar. 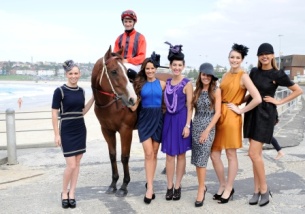 Takeover Target, took over Bondi Beach yesterday with the launch of the BMW Sydney Carnival.

“Together with our partners, we are working to make our Carnival the best thoroughbred racing and sales event in the Southern Hemisphere.

“It is events like the Carnival that ensure that Sydney, the gateway to Australia and NSW, remains number one when it comes to hosting major events in this country.”

ATC chairman John Cornish said there were exciting times ahead for Sydney racing as the Club was overseeing major developments at its two flagship tracks.

“Let’s make no mistake about it – on the completion of these works in time for next year’s BMW Sydney Carnival we will have event racing facilities as good as any in the world,” Cornish said.

“This will see Sydney racing back at our rightful place as a world leader in our industry and challenging like never before to be the number one racing destination in Australia.”

Leading jockeys Corey Brown and Kathy O’Hara and premier Sydney trainer Chris Waller discussed the serious side of the Carnival with their upcoming prospects on the turf.

Brown took the opportunity to climb aboard the legendary sprinter Takeover Target who came out of retirement to add some equine class to the launch at the scenic and iconic Bondi Beach.