Advertisement
The name may have jinxed the weather but it didn't sully attendance when the who's who of Sydney's event community gathered for the Swiss Grand Resort & Spa's 'Endless Summer Party'.

The name may have jinxed the weather but it didn’t sully attendance when the who’s who of Sydney’s event community gathered for the Swiss Grand Resort & Spa’s ‘Endless Summer Party’.

The Monday (Mar 30) night event was to be staged on the rooftop of the iconic Bondi Beach building to showcase its point of difference, with undisrupted views of the Pacific Ocean and surrounds.

A Bedouin tent, outdoor cocktail bar and sunset drinks had been planned for the terrace – the same venue where Pernod Ricard held its super successful Absolut Bondi summer sessions party earlier this year. 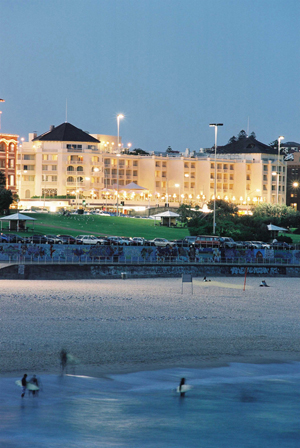 But when a torrential downpour kicked in early in the day, the organisers moved the event to a large meeting room on the ground floor.

Despite the bad weather, more than 200 people turned up to the event, enjoying endless canapés, drinks, live music and entertainment as they networked the room.

The vibe was that the event showed the hotel’s flexibility as well as the organisers can-do attitude and positive dispositions.

“The event was held to remind clients that the Swiss Grand remains open for some time to come, amid much confusion over the planned redevelopment of the site, which is unlikely to begin until at least late 2010,” said Accor media relations manager, Gaynor Reid.

“The Swiss Grand became Sydney’s hottest venue this summer, with the arrival of Cream Tangerine on its deck and the Absolut Vodka Parties on its rooftop and has also been used as a backdrop for many scenes in the current season of Underbelly.

“Now the GM Richard Holt is keen to assure clients that the hotel remains under normal operation and is still one of the best and most flexible event venues in town – whatever the weather,” she said.