By James Wells and Gwen O’Toole

Winner of Best New Product of the Year was Durham AV with the LiteFast 360 Magic transparent display with 360-degree viewing angle.

Available in two sizes, the product features multiple RGB LED panels that can display three images of 800×600 pixels which spin at 820 rpm. 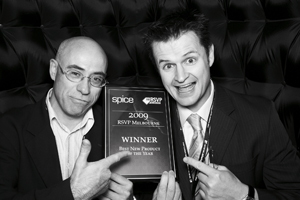 The guys from Durham AV celebrate their win at RSVP

According to Durham AV general manager, James Keane, the product can be hired or purchased and comes packaged with a PC and proprietary software.

“The Litefast can reproduce anything a plasma can – it is networkable and is great for exhibitions as digital signage and conference information. We are able to write and provide the content or you can write your own content and of course just like any computer it is USB compatible,” Keane said.

“We are using RSVP to attract companies to Durham particularly in the corporate market, hence the release of the new product.”

Finalists in the new products category were Beautiful Thief and On Set Arts.

The winner of Best Small Stand of the Year – under nine square metres was Zoos Victoria.

According to sales and marketing manager, Adriana Gutwirth, the stand was conceptualised with the assistance of Solution Red and Durham AV to promote the essence of Werribee and Melbourne Zoos. 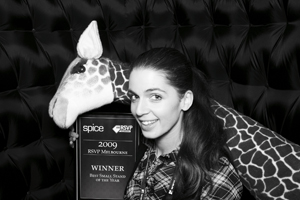 “We have tried to capture the genre and feel of both zoos and bring them to life. As people have seen the stand, they have really felt like they were walking into the zoo environment so they have a feel of what the zoo’s function facilities incorporate,” Gutwirth said.

“Most people rarely associate zoos with function facilities and they don’t realise they can enjoy animal encounters like feeding the giraffes. We have over 15 function rooms and both zoos can host between 10 and 3,500 people
each.

The finalists in the small stand of the year were NZ Haka and Kasbah Moroccan Imports.

The winner of Large Stand of the Year was Inflate Australia.

According to marketing manager, Jeremy Fisher, their stand featuring inflatable structures was created in conjunction with their preferred partners – Slide Productions who supplied lit Italian furniture, LED lighting from Phaseshift Productions and white flooring from No Fuss Solutions. 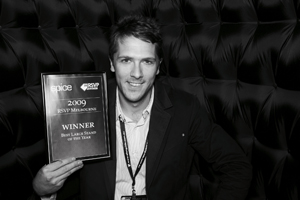 Jeremy Fisher shows off the Large Stand of the Year Award

“The stand is clean, white, simplistic and elegant and is designed to be simple and effective. We have a prime position and the show has provided us with a good opportunity to get our name out there,” Fisher said.

The finalists in the large stand category were Valiant Hire and Hirestyle.