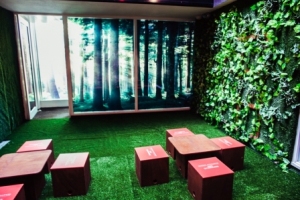 Rekorderlig Cider created a chill-out oasis that whisked guests away from the chaos of the bands and transformed them to a natural Swedish forest environment.

Guests sat on Rekorderlig wooden stools, noticing the grass under foot and lining the walls, as well as plants throughout and ambient lighting from the ceiling which created a natural feel. Rekorderlig also created a wooden stage where acoustic guitarists performed, creating a chilled out ambience in the sound proof room.

The elite of the Australian music industry and a handful of international artists gathered together for an event that is now shaping up to be one of the hottest events on this year’s music calendar. 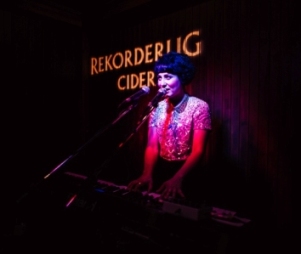 Guests were able to enjoy the talents of musicians Sam Westphalen and singer Maples (pictured) who performed in the chill-out lounge.

Guests had the chance enjoy an array of Rekorderlig ciders, poured into Rekorderlig glassware, including the new Orange-Ginger flavour.

Talented acoustic guitarist Sam Westphalen and beautiful singer Maples performed in the chill-out Rekorderlig lounge after the conclusion of the Awards, which provided guests with an escape to the craziness of the party. 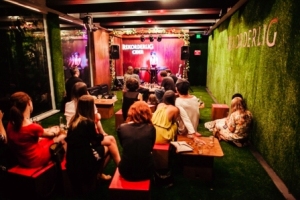 The Rekorderlig chill-out lounge was created for the sponsorship of Rolling Stone Awards but will remain in the venue long after the event finishes.

“This event was a fantastic association for the Rekorderlig brand and having the chance to partner with such an incredibly influential publication, such as the Rolling Stone, is a true honour,” said Elle Lewis from Rekorderlig Cider. “We wanted the Rekorderlig chill-out lounge to create an oasis away from the high tempo awards, where attendees can escape to a small part of Sweden. We were excited to present the Album of the Year Award and hope to continue our alignment with Rolling Stone Magazine.”

The Awards ceremony was attended by a horde of International headliners eager to enjoy the event. Guests had fun with a photo booth giving party-goers an opportunity to capture the night, whereas Bondi Ink gave a more permanent memento of the fun had at the Rolling Stone Awards, with an onsite tattoo parlour.