Over 30 Sponsors and supporters of the Festival attended the launch preparing for an exciting line up and the news of a new camping ground. The festival is hoping to attract more punters to stay within the community precinct and to indulge in all things rocking. 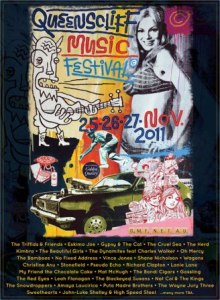 The Queenscliff Musical Festival will include a huge musical lineup including the Beautiful Girls, Eskimo Joe, Gypsy and the Cat and many more.

The launch unveiled this year’s musical lineup and was opened by sister act Stonefield, shortly followed by The Red Eyes, The Triffids and vocalist of Oh Mercy. The Festival will be joined by the Beautiful Girls, Kimbra, Gypsy and the Cat, Eskimo Joe, The Herd.

Other exciting news in the Festival launch included the festival will be moved to its original spot overlooking the gorgeous Port Philip Bay. Over 100 acts will be performing over 5 stages in the festival hub as well as on the “QMF Family Express” historic steam train and in a variety of venues within the town!

The Queenscliff Music Festival will run on November 25th 26th and 27th of November.

Check out the website to see the full lineup and for ticket information.