Australian set designer Brian Thomson, whose projects include Priscilla, Queen of the Desert, Gale Edwards’ La Boheme, Sydney Olympic and
Melbourne Commonwealth Games ceremonies and New Year’s Eve events, is busy constructing the set. Thomson’s minimal but striking stage design will be dominated by a giant chandelier measuring 9-metres x 9-metres, that will sparkle with thousands of crystals symbolizing the world of Verdi’s much-loved opera with its glittering Parisian salons.

The three week event will take place starting from 24 March 2012. 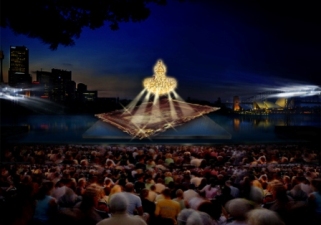 An artist impression of the purpose-built floating stage as it will appear for the event.

The chandelier will be suspended from a 26-metre crane, blackened out so that it is invisible against the night sky. At the end of La Traviata’s Act I Violetta, after singing the famous aria Sempre Libera, will ascend with the chandelier in a capsule as fireworks explode all around.

Audiences will watch from a luxurious 3,000 seat grandstand erected in the Domain at Fleet Steps, alongside the Royal Botanic Garden. The seating grandstand will have large and expansive hospitality areas at either end. The northern end being three-tiered with catering outlets on each level.

Tess Schofield is designing the 1950’s inspired costumes, including Mardi-Gras themed outfits for the masked ball in Act II, which will see guests arriving by motorboat.

Handa Opera on Sydney Harbour is the Company’s most ambitious project to date, working in conjunction with Destination NSW on behalf of the NSW Government to attract audiences from across the globe to be a part of this uniquely spectacular opera event.

The set design is complemented by a sophisticated lighting design by John Rayment which will create the atmosphere of changing scenes through colour, dazzling light displays and fireworks. The site has been designed by Ross Wallace.

ESS Australia (ESS) has been appointed to deliver the custom built water stage that will be the centrepiece of Opera Australia’s inaugural Handa Opera on Sydney Harbour in 2012.

Constructed primarily of steel and installed on nine piles, the stage will be set against the backdrop of the city skyline and Sydney Opera House and will support the extraordinary set as well as accommodate backstage facilities for the production crew, cast and orchestra.

In addition, there will be premium grandstand seating and patron hospitality areas that will bring comfort and sophistication to experiencing Opera on Sydney Harbour.