Vivid Sydney cemented its popularity, as over 400,000 attendees from Sydney, Australia and the rest of the world experienced events around Circular Quay from the Sydney Opera House to The Rocks. From jets of flame shooting out of Campbells Cove at FireDance to world exclusive concert performances by artists, including The Cure at Sydney Opera House and events for creative industry professionals, the festival offered something for everyone. Vivid Sydney catered for families, young people, seniors, creatives, tourists and everyone in between. 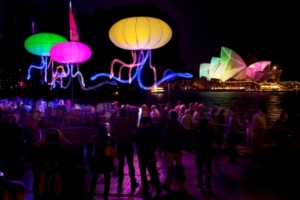 Light, sound and lots of action at the biggest ever Vivid Sydney.

Vivid Sydney is a ground breaking event model. The spectacular festival not only provided entertainment for the public and attracted visitors, but also proved to be an excellent platform for creative industry events. There is no doubt the international spotlight was shining on Sydney over the past 18 nights, that showcased our creative industries credentials to the world.

Vivid Sydney executive producer, Ignatius Jones, said the success of the 2011 festival was a credit to the passion and talent of the creative teams involved in the event. Reminiscing the dazzling display of sound and lights  Jones added, “it’s been a fantastic journey this year and an absolute pleasure to work with Events NSW who have a strong vision to create a festival that puts Sydney on the map globally as the creative hub of the Asia Pacific. Events NSW estimate Vivid Sydney will generate up to $10 million in economic benefit for the State.

“We knew this year’s festival would be popular, but we were blown away at seeing such huge crowds down at the festival, night after night enjoying colourful jellyfish swimming across the Sydney Opera House sails, painting digital light graffiti on the Museum of Contemporary Art and watching the awe inspiring 3D projections on Customs House” said Jones.

Vivid LIVE at Sydney Opera House and the Vivid Sydney music program, featured over 30 ticketed events, including a number of Sydney and world exclusive performances from artists such as The Cure, Bat for Lashes, Cut Copy and Spiritualized. Over 35,000 tickets were sold, in addition to 4,500 tickets to interstate and overseas visitors, which generated a $2.34 million gross box office. This makes it the most successful Vivid LIVE yet for Sydney Opera House. As an astonishing achievement, around 59 per cent of the tickets were sold to a new audience.