Advertisement
From giant light sculptures of floating jellyfish and erupting fire installations in Sydney Harbour, to exclusive international music performances and the stunning 3D illumination of the Sydney Opera House sails, Vivid Sydney will once again light up our

From giant light sculptures of floating jellyfish and erupting fire installations in Sydney Harbour, to exclusive international music performances and the stunning 3D illumination of the Sydney Opera House sails, Vivid Sydney will once again light up our city each night from 27 May – 13 June.

As the largest festival of light, music and ideas in the Southern Hemisphere, Vivid Sydney is a major celebration of our creative industries featuring a vibrant program of free and ticketed events around Circular Quay, The Rocks and Sydney Opera House.

Vivid Sydney executive producer Ignatius Jones said Vivid Sydney will illuminate the city with creativity and inspiration in ways we have never seen before. 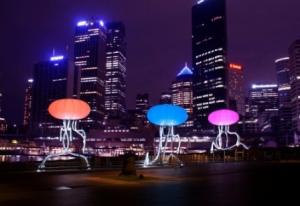 “We are working with our best and brightest talents in the creative industries, and inviting international creative minds to Sydney to show off what they can do, to swap ideas and most importantly reach out to the public and electrify us with their creations.

“At Vivid Sydney, creativity changes everything. There is nothing more thrilling than seeing the Sydney Opera House transformed into a canvas of bright colours and breathtaking images – one of the world’s most famous buildings singing and dancing in a way that few great monuments ever could,” he said.

Sydney Opera House will be the focal point of the festival with Vivid LIVE, an incredible music program of local and international artists curated by Stephen “Pav” Pavlovic of Modular, who has chosen the extraordinary French-based digital projection artists Superbien to light the sails.

An astounding line-up of local and international artists, including Bat for Lashes, Hypnotic Brass Ensemble, The Avalanches, Cut Copy, Horse Meat Disco and The Crystal Ark. Legendary jazzman, the ‘Saxophone Colossus’ Sonny Rollins will celebrate his 80th birthday on the Sydney Opera House stage, and renowned British act Spiritualized will perform their magnum opus ‘Ladies and Gentlemen, We Are Floating in Space’ – in its entirety with full choir and orchestra.

Vivid Sydney’s pop-up bar, The Sony Lounge, will be set up in the Western Foyers of Sydney Opera House with an ever-changing menu of DJs and a daily radio program on triple j presented by Belgian brothers 2manydjs.

Vivid Sydney will include over 40 stunning light art installations from local and international artists in a free outdoor exhibition where children are encouraged to climb on interactive sculptures and aspiring photographers can put their night camera settings to the test.

People of all ages will enjoy this sensory experience, interacting with diverse and colourful sculptures including an enormous sketchpad where you can draw your own light art, a giant crystal spiderweb shimmering in the dark, a social network of friendly fireflies that that react to torch light and a group of rainbow life-size men.

Iconic buildings around Circular Quay will be transformed like never before with 3D projection technology and laser techniques, while Sydney’s beautiful Campbell’s Cove will erupt in a nightly masterpiece of giant flame with five nightly performances of the Fire Dance spectacular.

Vivid Sydney will also engage our creative industries with a provocative range of artistic collaborations, public talks and debates presented by Creative Sydney. X|Media|Lab, the internationally acclaimed creative think-tank, returns to Vivid in 2011 to hold a Sydney lab on the future of digital media along with three other industry events for those working in the creative professions including SPARC International Lighting Event, CeBit Australia and Mumbrella360.

Events NSW CEO Geoff Parmenter said 2011 marks the third year of Vivid Sydney and our research shows Sydneysiders have embraced the festival and consider it Sydney’s major festival in winter.

Last year our research showed that Vivid Sydney attracted more than 300,000 people and in 2011 we expect up to 400,000 people will attend the festival. Events NSW estimate Vivid Sydney will generate up to $10 million in new money for the State. Vivid Sydney is one of five signature events on the NSW Events Calendar developed by Events NSW on behalf of the NSW Government.

The full Vivid Sydney program is available by clicking here.