Advertisement
Starwood Hotels & Resorts Worldwide have announced an important milestone in its history, opening its 1000th hotel and resort yesterday

Starwood Hotels & Resorts Worldwide have announced an important milestone in its history, opening its 1000th hotel and resort yesterday (March 31). The Sheraton Qiandao Lake Resort is located on the shores of China’s famed Qiandao Lake, also, aptly known as the Lake of Thousand Islands. 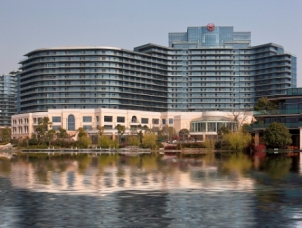 
“We are delighted to welcome our 1000th hotel, and the fact that it is a Sheraton in China seems pre-destined,” said Frits van Paasschen, President and CEO of Starwood. “This hotel is emblematic of both our history and our bright future. As Starwood’s largest and most global brand, Sheraton provided us early footholds in emerging markets, including China in the early 1980s when we were the first international hotel there. Today, Starwood is the world’s most global hotel company with plans to open 300 hotels in the next three to four years. and for the first time we have more hotels outside the U.S. than inside. And there is no more fertile ground to grow than in China where we plan to double our footprint to 100 hotels by 2012.”

Starwood expects to open 80-100 additional hotels in 2010 – 70% of which will be outside the United States, with the majority in Asia Pacific. In China, Starwood is slated to open more than 20 hotels this year.

“Some expect that more than 70% of the world’s growth over the next decade will come from emerging – or what we like to call ‘fast-growing’ – markets, which is consistent with Starwood’s global pipeline of new hotels and skew towards development in markets like China and India,” said Simon Turner, President of Global Development for Starwood. “By working with the right partners in the right places on the right properties, we are well poised to continue to lead the charge in growth throughout these critical markets.”

The 250-room Sheraton Qiandao Lake Resort is located on the scenic lakeshore of Qiandao Lake, a popular destination for mountain climbing, cycling and other outdoor activities. Qiandao Lake is well known as home to “the Atlantis of the East,” the 1,800 year-old remains of an ancient Chinese city, an archeological treasure submerged beneath the water. The city walls and architecture have remained preserved and are heralded as some of the most substantial sunken artifacts in the world.

“With its fascinating cultural and historic location, the new Sheraton Qiandao Lake Resort is symbolic of the diversity of Starwood’s portfolio across nearly 100 countries,” said Miguel Ko, Chairman and President of Starwood’s Asia Pacific Division. “Our portfolio includes some of the world’s oldest, most famed hotels dating back centuries and also nearly 200 brand new hotels opened in the last two years, many of which are fast becoming icons of their own.”