Advertisement
Virgin Blue's new Sydney-Hamilton Island flights are providing a win-win situation for hotels on and around the destination, with several properties reporting a very positive response since the daily direct service launched in early July.

By James Wilkinson on Hamilton and Hayman Islands

Virgin Blue’s new Sydney-Hamilton Island flights are providing a win-win situation for hotels on and around the destination, with several properties reporting a very positive response since the daily direct service launched in early July. 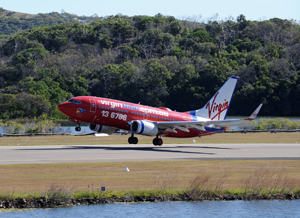 Hamilton Island’s 3.5- to 5-star hotels, resorts and holiday homes have all benefited from the new flights, as have uber-luxury properties qualia and Hayman.

qualia general manager Jason Friedman told SpiceNews the new flights have provided a substantial boost to business at the exclusive property, particularly from the pointy end of the aircraft.

“With the availability now of premium economy, we have had a very positive response,” Friedman said. “Virgin Blue is extremely supportive of business tourism and the extra capacity has been fantastic.

The additional 180 seats daily in each direction between Sydney and Hamilton Island now sits alongside Virgin’s direct Brisbane flights, along with Jetstar services from Brisbane, Melbourne and Sydney, and QantasLink from Cairns.

Virgin Blue CEO Brett Godfrey said the decision to launch the direct service was made following consistent demand from Sydney travellers for Virgin Blue flights to Hamilton Island via Brisbane.

“Hamilton Island and Whitsunday Tourism has been very active in convincing us to launch a direct route from Sydney and we were pleased to be in a position to do so,” Godfrey said.

“We have every confidence in the appeal of the Whitsunday region as one of Australia’s most popular destinations and we look forward to working with the region to boost tourism numbers and make the new direct service a success,” he said.

Along with Friedman, Hamilton Island CEO Glenn Bourke was also excited at the prospect of increased high-end traffic, thanks to the addition of premium economy by Virgin Blue.

“We believe that guests at our world class resort, qualia, will be excited to take advantage of Virgin Blue’s Premium Economy experience,” Burke said.

The inaugural Virgin Blue flight direct from Sydney on July 4 marked the first time a superior seat product had been available on the route since Jetstar took over Qantas flights in 2003.

The Virgin Blue Sydney flights have also had a significant flow-on effect for neighbouring Hayman Island, with the 5-star resort also seeing a substantial lift in traffic. That was also aided by the addition of Hayman to Virgin’s route network in June – which saw launch transfers between Hamilton and Hayman Islands able to be purchased on the airline’s website.

“By partnering with Hayman and including the luxury launch transfer into the flight booking we’ve simplified the process for travellers, giving them one less thing to worry about,” Godfrey said.

Speaking to SpiceNews on Hayman Island, general manager Roger Wright said bookings had been exceeding expectations and he was very positive about the partnership going forward.

Wright said the partnership would be a boost to the MICE market in particular – one that has already seen a lift on Hayman since the launch of Virgin Blue’s Sydney flights.