Advertisement
Hawaii is continuing its streak as a hot destination for conference and incentive travel, thanks to a strong Australian dollar, affordable luxury accommodation and the latest round of specials from Hawaiian Airlines.

Hawaii is continuing its streak as a hot destination for conference and incentive travel, thanks to a strong Australian dollar, affordable luxury accommodation and the latest round of specials from Hawaiian Airlines. 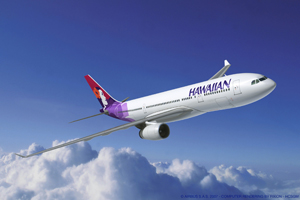 Several major Australian organisations, associations and companies have held conferences in Hawaii in recent months and that trend is set to continue well into 2010, as airfares continue to hover around the $1000 mark.

Hawaiian Airlines, which will mark 80 years of continuous service on November 11, 2009, is again making the destination as affordable as ever to visit thanks to its latest sale, which sees prices starting from $1104 return between Sydney and Honolulu.

Hawaiian Airlines general manager – sales and marketing, Australia, Sherilyn Robinson, says the $1104 airfare includes taxes, while a $1260 airfare is also available for travellers wanting to visit the neighbouring islands of Maui, Kauai and the big island of Hawaii.

“With the Aussie dollar high, now is the perfect time to start planning your next trip,” she says. “Our spring over to Hawaii fares make it even easier to do so.”

The ‘Spring over to Hawaii’ airfares are available for sale until October 31, for travel between January 22 and March 25, and again from April 17 until June 30, 2010.

All Hawaiian flights from Sydney to Honolulu include meals, drinks and main-screen entertainment, plus a baggage allowance of two bags, each weighing up to 32 kilograms for each passenger.

In related news, Hawaiian Airlines has confirmed the first wide-body Airbus A330-200 aircraft will join the carrier’s fleet in April and the first two aircraft will be used on the Honolulu-Los Angeles route starting in June.

“The arrival of the first of our new long-range Airbus aircraft gives us the opportunity to expand our service from Hawaii’s largest visitor market when travel demand is at its highest,” says Hawaiian Airlines president and CEO, Mark Dunkerley.