Advertisement
Despite the global economic downturn, uber-luxurious Hamilton Island resort qualia remains in high demand from both the leisure and group travel segments.

By James Wilkinson on Hamilton Island

Despite the global economic downturn, uber-luxurious Hamilton Island resort qualia remains in high demand from both the leisure and group travel segments. 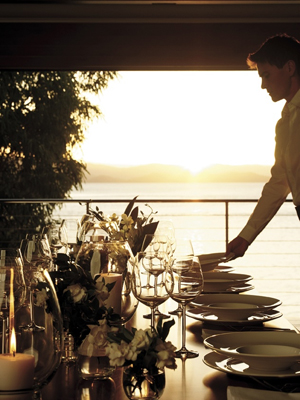 “qualia is performing very well, considering the current climate,” qualia general manager Jason Friedman told SpiceNews. “qualia has had  a mixture of both Australian and international guests that have all enjoyed the ‘qualia effect’.

During a site tour on Monday (Jul 27), Friedman said the luxury market was holding up well, noting that six VIP aircraft had visited Hamilton Island during the week prior, with all guests staying at the exclusive property.

On the MICE segment, the news is also good, with Friedman reporting strong return business – particularly from the United States.

“Since opening in October 2007, we have welcomed both non-sole use and sole use groups from various industries including finance, pharmaceutical and auto,” he said.

“We have had three groups form the USA and three return groups already within the two years that the resort has been opened.

“A lot of these high end incentives are very well travelled and we have received great feedback from PCOs and their clients,” he said.

Friedman said while there was an economic downturn at present, with companies tightening travel budgets, smaller incentive-based bookings were still in high demand.

“Obviously some corporates are pulling back, but they still need to incentivise and motivate staff so it may mean lower key options – yet still with ‘wow’ factor – closer to home, which makes our location ideal,” he said.

Friedman said new direct Virgin Blue flights from Sydney, complete with premium economy, would help drive this sector, while there was also “endless potential” for luxury incentive trips from the United States, thanks to the one-stop Los Angeles-Brisbane-Hamilton Island flights on Virgin Blue and V Australia, which launched in April.