They join two Pullman hotels in Cairns (Reef Casino and the former Sebel) to give the Pullman brand a prominent position in Tropical North Queensland’s hotel and tourism industry. 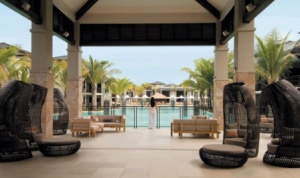 The two new additions bring the Pullman network to ten in Australia, making it officially, Australia’s largest 5-star hotel brand – achieved just four years after Pullman debuted in Australia. They join a global network of over 70 hotels, which is expected to grow to 150 hotels and resorts by 2015.

The Sea Temple Golf Club features an 18-hole championship links-style golf course and is rated in the Top 50 public access courses in Australia.

The Pullman signature of providing exceptional facilities for meetings and events lends itself perfectly to Pullman Palm Cove, as the resort recently unveiled its new purpose built Garden Pavilion event centre which can hold up to 100 delegates.

Fitted with state-of-the-art smart screens, black-out blinds, internal bathrooms, a kitchenette and ample storage facilities, the Garden Pavilion adds to the resort’s already outstanding conference and event offerings which consist of four specialist conference rooms which can hold up to 150 people.

“The Pullman resorts in Palm Cove and Port Douglas are two of Australia’s finest and they will benefit considerably by being part of Pullman’s rapidly growing international 5-star network.

“We will be looking to grow the conference and incentive market into TNQ, as well as growing domestic leisure and international business into the region,” he said.