Advertisement
Believed to be a first for any hotel in Australia, Perth's The Terrace Hotel held a Social Media Sleepover, bringing together a cross section of social media influencers to celebrate the opening

Believed to be a first for any hotel in Australia, Perth’s The Terrace Hotel held a Social Media Sleepover, hash tagged #SocMedSleepover, bringing together a cross section of social media influencers to celebrate the opening of this iconic city landmark that has now been re-born.

Fifteen guests were invited to The Terrace Hotel to document their experience with a flurry of tweets, Facebook updates and Instagram images and by dinner the #SocMedSleepover was trending in Perth. 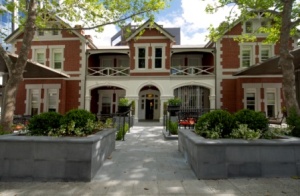 The Social Media Sleepover launched the opening of the iconic Terrace Hotel in Perth.

With the help of social media strategist, John Cooke (@freocookster) and twitter enthusiast, Adam Barrell (@tweetperth), marketing and events manager, Meg Coffey created a game of Cluedo which was played out in real-time.

“We wanted to create more than just a dinner party – we needed something that would keep the public interested in following along on the evening. The idea of reviving the childhood game of Cluedo, which was played in a mansion, would work perfectly with our luxury hotel, bar and restaurant,” said Coffey.

‘Accusations’ were made throughout the night as the group travelled from the McAlpine Dining Room to the Sommelier’s Tasting Room, finally enjoying a pyjama party over desserts in the Premier Suite. Some very sore heads gathered for breakfast on the terrace for the final clue. The public was encouraged to follow the hashtag on Twitter and were allowed to make three guesses for their chance to win an overnight stay.

“Social media is a core part of our vision and launch strategy, we can’t wait to share The Terrace Hotel with everyone,”  Coffey said. “There is no typical social media user anymore – they cover all aspects of life and age, and the guest list for the #SocMedSleepover reflected that.”

An experiment in social media, #SocMedSleepover was held Saturday 24 November and was the participants were the first guests to spend the night in the hotel.