Mantra Group has signed an exclusive agreement with Niecon Developments to manage its $850 million twin residential tower development at Broadbeach, which comprises 505 residences. It will be the first five-star hotel on the Gold Coast since the opening of Palazzo Versace in 2000.

Mantra Group CEO Bob East said the towers will be branded as Peppers Broadbeach and become the cornerstone of the Group’s five-star offering on the Gold Coast. 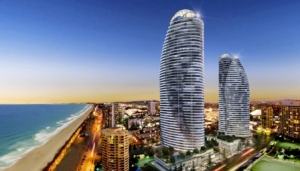 An artist impression of the Mantra Group’s Peppers Braodbeach

“The new Peppers Broadbeach will be the largest property within the Peppers portfolio and represents the brand’s first foray into the metropolitan hotel market,” East said. “This landmark agreement demonstrates the evolution of Mantra Group, and our three brands, as we continue to grow and offer our guests new and exciting options for both business and leisure accommodation.

“This latest announcement reinforces Mantra Group’s long-term plans to increase the size of their portfolio and develop new initiatives such as the introduction of the Peppers product into CBD environments with established leisure and corporate markets and strong occupancy levels.

“As one of the Gold Coast’s largest employers, it is very fitting that our next phase of growth and renewal begins in such an exciting development in Broadbeach,” he added.

The twin tower development will also include 11,000 square metres of retail and commercial space which will be home to more than 45 retail shops fronting a unique retail boulevard.

East said Peppers Broadbeach will become one of the most technologically-advanced hotels in Australia, harnessing the latest in portable technology, and guest services.

“The architectural design of the hotel reflects a distinct fusion of city sophistication and coastal relaxation, with both towers featuring an extensive use of life spaces including Zen gardens, tai chi lawns, private cinemas, guest lounges, teppanyaki barbeques, steam rooms, saunas and lap, plunge and resort pools,” he said.

The one, two and three-bedroom apartments will also feature a pillow menu, gourmet minibar with local and organic products and a pre-order gourmet pantry delivery service.

East said Peppers Broadbeach would be launched in three phases, with a soft opening from October 2010. The hotel will officially open with the full suite of Peppers services in March 2011.