Advertisement
Castaway Island, located in the Mamanuca region of Fiji, has celebrated its 50th anniversary and Spice was there. 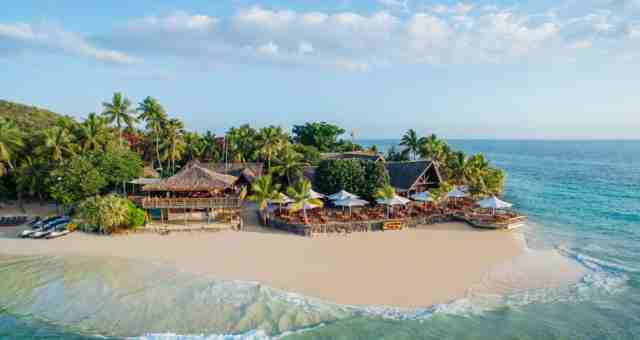 Among the guests at today’s event will be the Fijian Tourism and Trade Minister Honourable Faiyaz Koya, along with Outrigger Enterprises Group President and CEO David Carey, the company’s COO Paul Richardson and the CEO of Tourism Fiji, Matthew Stoeckel.

Also present is former Castaway Island owner and current consultant to the property, Geoff Shaw, who purchased the resort in 1992 and later sold it to Outrigger in 2014.

“It was just wonderful. They were the happiest, funniest and most wonderfully productive times. There were also times of trauma and natural disaster when everyone jumped in and got the job done.”

Earlier this year, Cyclone Winston hit Castaway Island and suffered extensive damage with 12 bures needing to be re-built. The resort was closed for three and a half months and with all staff remaining with the property to work on its rejuvenation before it re-opened again on 1 June.

The resort, which has 65 air-conditioned burrs and its own desalination plant and occupies only over 10 per cent of its 70 hectares, also features four restaurants, four bars, two freshwater swimming pools, a Kids Club and numerous water based activities including a dedicated Scuba Diving service.

One of Castaway’s key differences is its returnee guest rate of 40 per cent, which is approximately twice the rate of other Fiji resorts.

Emphasising this enduring support for the property, a large number of guests who have visited the island dozens of times since it opened in 1966 have returned to join the celebrations at the resort known as the original ‘barefoot’ Fijian hospitality experience and meets guests on arrival to its white sand beaches with the signature “Welcome Home” greeting.

Two guests joining the celebrations include one man who first visited when he was seven years old has returned over 30 times including one time to get married, while Australian Ian Braddock, who has visited 44 times, recalled his trips in the 1970s.

“We would leave Lautoka on the yacht Sea Spray for a very slow, three hour trip, consuming the odd Fiji Bitter and listening to the band. We’d go on fishing trips to Valase Beach and on our return, some of the staff would come around and we would enjoy a great BBQ fish lunch, burying the BBQ plate in the sand for next time until it was carried away in a cyclone,” he recalls.

Also joining the celebrations is former Guest Relations and Duty Manager, Mere Kasaqa, who retired in 2010 after working at Castaway Island for 32 years and has been succeeded as a Duty Manager by her daughter Aseri.

When combined with the visitation to the other Outrigger-owned property in Fiji, the visitation from Australian residents exceeds 84 per cent and with New Zealand residents, Australasian visitation exceeds 91 per cent.

Castaway General Manager, Steven Andrews said that he was extremely proud to be hosting more than 300 guests on the island for the anniversary celebrations.

“My team have worked tirelessly to bring this event to fruition and I feel honoured to be at the helm of this iconic resort at a significant time in its history,” he said.

“The Fijian people and their authentic local culture optimise the values of Outrigger as it is akin to the Aloha spirit in Hawaii,” he said.