Advertisement
Exhibition and TradeFairs have announced today that their special events tradeshow, Melbourne's Event Showcase will be postponed in 2012 to take time to reconsider the format of the show.

Exhibition and TradeFairs (ETF) have announced today  (28 Feb) that their special events tradeshow, Melbourne’s Event Showcase will be postponed in 2012 to take time to reconsider the format of the show.

Originally called RSVP Melbourne, the owners and organisers of the tradeshow say the residual effects of the Global Financial Crisis (GFC), the consolidation of event suppliers and reduced marketing budgets continue to impact the events industry, and therefore the strength of the show. 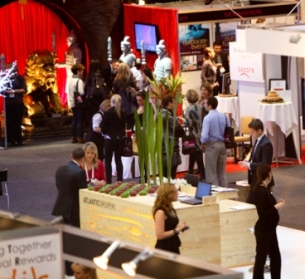 Organisers of the Melbourne’s Event Showcase have announced a postponement of the exhibition for 2012.

In 2008, the tradeshow operated at its peak; however the ill-timed 2009 event, which occurred just as the affects of the GFC hit Australia,made a significant dent in the momentum and success on the show floor.  ETF conducted extensive consultations with industry representatives and visitors after the 2010 tradeshow to seek feedback on the future direction of the show.

Led by Jodie Richmond, general manager & CEO, ETF took the recommendations from the industry and made significant investments in changing the brand, the venue and the dates of the show.

“We are committed to Melbourne’s special event industry and have worked hard to build on the strength of ‘Party After Dark’ and the ‘Event Master Class’ elements, including making major changes for the 2011 show.

“However, the overall show format still doesn’t appear to be fully resonating with the industry. Therefore, we have taken the decision to postpone the show for this year and focus our energies on better understanding the challenges and specific needs of Melbourne’s event industry.

“We want to ensure the show is valuable and relevant in helping Melbourne’s event industry rise to meet those challenges, now and in the future,” said  Richmond.

Consultations with industry members will occur later in the year to pave the direction for 2013 and beyond.

The management and staff of ETF wish to acknowledge and thank the key suppliers to Melbourne’s Event Showcase, especially the Royal Exhibition Building, InfoSalons and Exponet.

The ETF team will now focus on managing the burgeoning success of Sydney’s Event Showcase and the co-located Australian Business Events Expo in 2012.