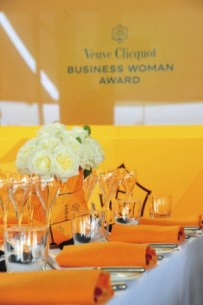 The event, held at Cafe Sydney saw 100 guests gather for an exclusive lunch.

The event, produced by Rizer, was a sit down lunch to unveil the 2012 Veuve Clicquot Businesswoman of the year, Maryanne Shearer, CEO of T2.

The event also recognised Oz Harvest founder and CEO Ronni Kahn with a Tribute Award for innovation, entrepreneurial skill and contribution to the community.

Hosted by Georgie Gardner, the event was made up of successful Australian businesswomen, Veuve Clicquot Maison representatives from France, the Governor General and other special guests. Guests enjoyed lunch, catered by Café Sydney. 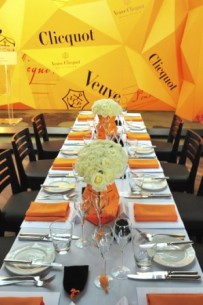 The unique set build was produced by Staging Rentals and Construction Services.

The set build, produced by Staging Rentals and Construction Services and designed by Alex and Brad, was inspired by the Veuve Clicquot ‘Clicq’ Up’ Ice Bucket.

This design was carried out through the set, florals on tables and video treatment, which was produced by The Monkey’s Cobbler.

It was a return event for Rizer, who had organised the event production in 2010. 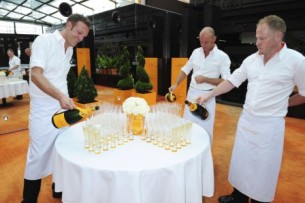 Guests enjoyed catering by Cafe Sydney and of course, flutes of Veuve Clicquot.

“The day of the event was one of the wettest days ever recorded in Sydney,” said Simon Hayward of Rizer. “Plans for balcony pre and post program drinks had to restructured.”

“Events held at Café Sydney feel grand due to the spectacular view and surrounds of the restaurant,” said Hayward. He also admitted that timing of the event and a seamless post lunch bump out was crucial because Café Sydney needed to be back in operation for their very popular dinner trade.

Hayward said the teamwork between the client, Moët Hennessy Australia, Black Communications, and all the suppliers certainly paid off, allowing them to raise the bar from the previous events.