Advertisement
Event design and production agency, MSF Events has produced another spectacular launch party for the Biennale of Sydney.

Event design and production agency, MSF Events has produced another spectacular launch party for the 17th Biennale of Sydney.

Wednesday 12 March was the “opening night” of the 17th Biennale of Sydney, and over two thousand guests travelled to Cockatoo Island by ferry to celebrate the launch of the three month exhibition. 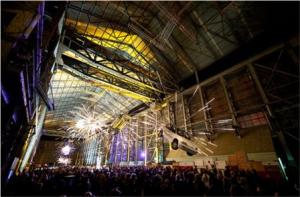 Cockatoo Island welcomes over 2,000 guests for the official opening of the 17th annual Biennale
Courtesy of photographer Peter Murphy

Australia’s largest contemporary visual arts event was started in 1973. The exhibition is held every two years in leading art venues and public sites, and is renowned for showcasing the freshest and most innovative contemporary art from Australia and around the world.

In 2010 the centrepiece of the party in the impressive Cockatoo Island Turbine Hall was “Inopportune: Stage One”, a nine-car piece meant to re-enact a Ford Taurus somersaulting through the air. Each suspended vehicle represents a moment in time, like stills from a video. Flashing LED lights give the piece a theatrical tone that adds to the experiential element of the work. 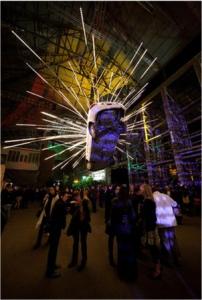 The event centrepiece, a nine-car piece menat to re-enact a Ford taurus somersaulting in air
Courtesy of photographer Peter Murphy

The entire cliff face was awash in a red glow while across the apron in the Bulgari Lounge a “Secret Garden” was created, where guests could escape the harsh industrial landscape and intermingle amidst the lush greenery.

Mark Fordham, event director at MSF Events said; “It was a real privilege to work with the team at Biennale of Sydney for the second time (MSF also produced the party in 2008) and to produce another sensational event on the island!”

Fordham went on to say that; “From our perspective, the success of the event is not just about clever design and styling in such a dynamic space like Cockatoo Island, with its many challenges, but also mastering the logistics and technical issues associated with staging a large event on an island and the meticulous planning that goes into ensuring that the event is seamlessly and safely delivered.”

To take a 360 degree panoramic journey around the party, click here.