Over 230 event industry professionals celebrated the launch of Spice Magazine, formerly Main Event on Thursday (Jul 2) for one sweet party.

The ‘Sugar and Spice’ themed event saw Surry Hills restaurant Souk in the City open the front doors to link with the venue’s Moroccan marquee, providing a never-before-seen venue for partygoers. 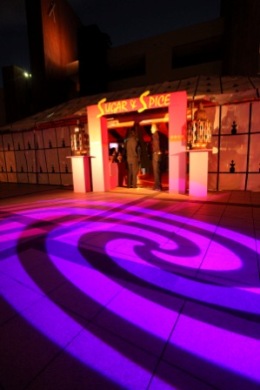 The entryway to the marquee at
the ‘Sugar and Spice’ event

The sister magazine to SpiceNews.com.au and formerly called Main Event, the magazine underwent a re-branding, creating one unified product.

Industry supporters rallied together producing a cocktail style function full of sugar and spice and all things nice.

“We were so fortunate to have so many industry suppliers, literally come to the party and support us to put on an amazing event,” said Spice Magazine editor, Gwen O’Toole, “particularly companies like Pages Event Hire who were so flexible to work with and helped us out in a pinch for extra glassware when our numbers really grew.” 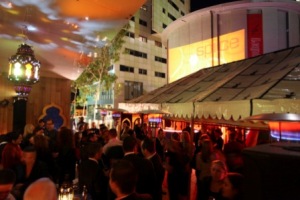 Guests moved between the marquee and restaurant
to participate in games, view entertainment and get
a peek at the outdoor wall projections

“From the great folks at Crew on Call providing the labour to set it all up and provide security to Souk who graciously put their venue and food on display, it all went smoothly,” she said.

“We needed to chose somewhere that was for the most part, unseen as an event venue by the industry and Souk in the City was perfect, obviously for its Moroccan feel and central location and for the amount of space and unique marquee available for events. I think many guests were surprised that something like that could be done in the middle of the city.”

The event, managed and themed by the James Gordon Workshop saw guests collecting spices at the specially constructed spice market and trading in custom tokens for bags of sweets at the lolly bar, unveiled during the night. A unique and creative touch that had guests buzzing with excitement (and sugar.) 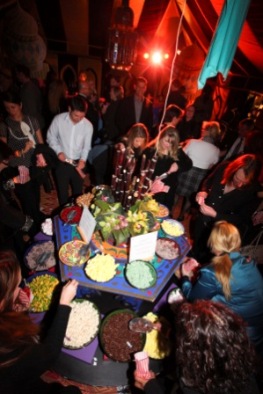 One hot spot of the event, the surprise lolly
bar where guests traded spice tokens
for bags of treats

The crowds were entertained by musicians Carbon 7 and Bollywood dance group, Bollywood Sensations as well as the visual projections which took place on the exterior of a nearby building, created by AV 24-7.

“We decided to do something different with this event, including games like guessing the number of sugar cubes or peppercorns in a jar and having guests write their guesses on their business cards rather than doing the standard door prize draw. It worked so well,” said O’Toole.

Nosh Hospitality staff kept the beverages coming with Preece wine, Hoegaarden and Leffe all on offer, paired up with a bit of sweet celebration cake, provided by Planet Cake and the essential spicy fare supplied by Souk. 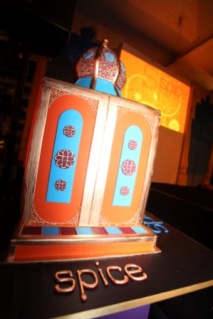 The very sweet (and artistic)
SPICE Cake, from Planet Cake

“We had to point the cake out to a few people,” said O’Toole. “It was set up near the stage from the beginning of the event and was so beautifully designed that most people were shocked that it was edible.”

Spice Magazine, which will now be distributed bi-monthly will be balanced with http://www.SpiceNews.com.au sent twice-weekly.

Read all about the event in more detail with plenty of images, courtesy of Oneill Photographics, in the coming August issue of Spice Magazine.