Advertisement
A World Record was set at NSW's Bondi Beach on Australia Day last Wednesday as a whopping 2068 people joined up to create the longest line of inflatable airbeds on water at the 2011 Havaianas Thong Challenge.

A World Record was set at NSW’s Bondi Beach on Australia Day last Wednesday (January 26) as a whopping 2068 people joined up to create the longest line of inflatable airbeds on water at the 2011 Havaianas Thong Challenge.

The thousands of Australians taking part in the 6th Annual Havaianas Australia Day Thong Challenge, raised $68,100 for the Nippers and $20,000 for the Queensland Flood Relief Appeal. 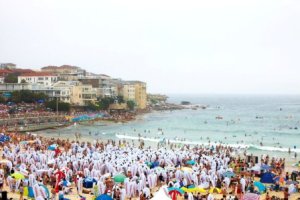 Over 2,000 people turned up to the Bondi Event, breaking the record previously held by WA’s Cottelsoe Beach in 2010.

Thong Challenge organiser Emma Kowaleczko says, “It’s not everyday you break a world record and we are thrilled. To be able to raise much needed funds for local Nippers programs and Flood Relief in QLD make this a proud moment for Havaianas. Look out 2012!” 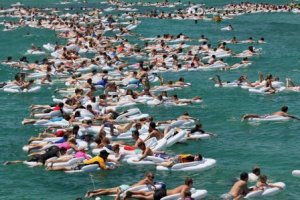 This year saw the Cottelsoe event bring out 1947 participants

“We are so grateful to all of the people who attended the event and to Havaianas for organising such a wonderful day. The money raised will go towards buying new equipment, transporting the kids to and from surf carnivals and maintaining the Surf Club facilities. This generous donation means that we can focus on training the Surf Life Savers of tomorrow,” said Nippers spokesperson and North Bondi Club President Grant McMah.