The event aims to introduce the next generation of desingers to the fashion industry. 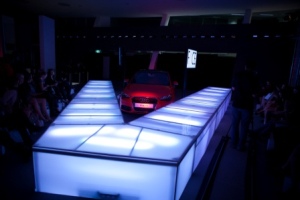 As the event’s principal sponsor, the Audi Centre Sydney was in fine form for the stylish showcase

Audi Centre Sydney was transformed into a spectacular fashion venue with the new and stylish Audi A1 a standout feature in the catwalk show, which featured five of the ten exhibiting designers. 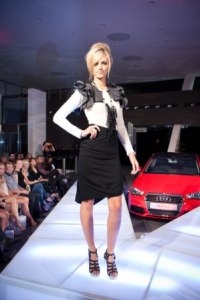 Models presented designs from up and coming designers including Lisa Tarantos, pictured above.

Emerging designers Lisa Taranto, Abyss by Abby, Otto Mode, Voyaguer and Latopic were excitedly received by the fashionable crowd and looked highly prospective to make big waves within the industry.

EventSound, designed and supplied Audiovisual services for the event , including the design concept for the ‘A’ shaped perspex catwalk with the Audi A1 as the Centre piece. The catwalk was under-lit with colour changing LED Lighting. Event Sound are the preferred audiovisual supplier for Audi Centre Sydney

Bayleaf is the exclusive event caterer at the Audi Centre Sydney.