Advertisement
In the lead up to the FIFA 2010, all eyes are on South Africa as an event destination as the the continent's largest business tourism gathering officially opened on Wednesday at the Sandton Convention Centre in Johannesburg.

In the lead up to the FIFA 2010, all eyes are on South Africa as an event destination as the the continent’s largest business tourism gathering officially opened on Wednesday (February 24) at the Sandton Convention Centre in Johannesburg.

Meetings Africa 2010, in its sixth year will welcome an expected 3,000 visitors and hosted buyers over three days. Conference planners, corporate travel agents, incentive organisers and corporate event organisers from Australia as well as the UK, Germany and the US have arrived in South Africa eager to discover the suppliers and services available to them. 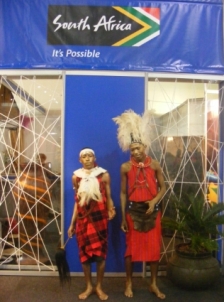 In addition to the exhibition, two other high profile events will be taking place simultaneously. For the first time, tourism ministers of the G20 countries will meet together with the UN World Tourism Organisation. The summit will also host a gala event on Wednesday evening.

“This is going to be a memorable week in the history of business tourism in South Africa,” said Sandton Convention Centre’s general manager of sales and marketing, Karin White.

“I am particularly encouraged with the year-on-year growth of this segment of the tourism industry. Our track record in hosting major international events and domestic events is recognised around the world, and we are looking forward to welcoming the Meetings Africa delegates to our world-class venue. This event provides a great opportunity to network and learn and, this year in particular, should be used as a platform to plan for the period after the much- anticipated 2010 FIFA World Cup,” said White.