Advertisement
Ibis Christchurch has opened its doors today, becoming the first city centre hotel to re-open since the February 2011 earthquake.

Ibis Christchurch has opened its doors today (4 September), becoming the first city centre hotel to re-open since the February 2011 earthquake.

The Ibis – located in Hereford Street, just off Cathedral Square – has undergone major remedial work, including the renovation of all 155 rooms and public areas, as well as structural strengthening to meet the city’s new building code. Just four years old when the quake hit, the Ibis received only minor damage and re-opens as a virtually new hotel featuring the latest Ibis branding and facilities. 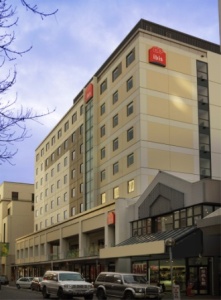 The Ibis Christchurch has opened today, making it the first hotel in the city centre to open following the 2011 earthquake.

The hotel opening will play a crucial role in the revitalisation of Christchurch’s tourism sector, signaling that the city is firmly back on the map and ready to welcome visitors. It will be a major benefit to business travellers and officials involved in the reconstruction of the city, allowing easier access to buildings and offices around the city centre and encouraging other businesses to re-open to service the new demand. Local residents will also receive a boost with up to 50 people employed at the hotel.

The launch of the hotel comes a month after the announcement of a masterplan for the ‘re-imagining’ of the city. The Ibis will be very close to the proposed convention centre as well as other key tourism, shopping and entertainment facilities.

For tourists planning to visit the city now, the Ibis is adjacent to the new shopping heart of Christchurch, the Re:START Mall in Cashel Street. The “pop up” shopping precinct is the new vibrant heart of the city, featuring many new designer shops and modern cafes. The Ibis re-opening will also add significantly to the city’s restaurant stocks, with the new Oopen Pasta & Grill offering a menu featuring South Island specialty product and wines.

Hotel Ibis Christchurch general manager, Tim Dearsley, said that the 4th September re-launch date was selected because it represents the second anniversary of the first major quake to hit Christchurch, though it didn’t have anywhere near the same impact as the subsequent February 2011 quake.

“Christchurch tourism has suffered enormously because of the perception that the city was closed following the earthquake,” Dearsley said. “This was never true, but the re-opening of the Ibis will highlight that the city centre is now accessible to travellers and that there is plenty to do in the city, including many of the old activities, as well as new and innovative tourism experiences.

“While some of the CBD is still cordoned off, it is important to note that the ‘red zone’ has reduced from 387 hectares to 49 hectares today and the authorities aim to have the city fully open by the middle of 2013

“The re-opening will help accelerate the city’s regeneration process. It will not only ease the critical shortage of accommodation and provide employment for local residents in Christchurch but it will allow significant progress to be made in reviving the city’s central business district and tourism industry.

“The city has really needed the confidence boost of a major international hotel brand re-opening to cater for domestic and overseas visitors.”

Accor’s Novotel Christchurch hotel is scheduled to re-open in mid 2013.