Advertisement
A bizarre and uniquely Kiwi tradition which sees 30,000 Jaffas race down the world's steepest street in Dunedin will again take place July 11-17.

A bizarre and uniquely Kiwi tradition which sees 30,000 Jaffas race down the world’s steepest street in Dunedin will again take place July 11-17.

The round, orange flavoured candy-coated chocolate balls have been a favourite of Australians and New Zealander’s alike with the Kiwis consume around 46 million Jaffas each year – over ten times the population. 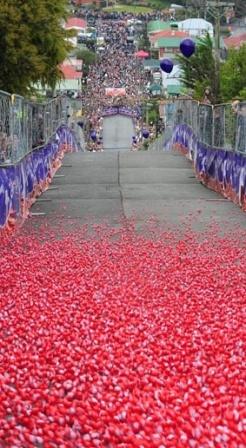 Each year as part of the Dunedin Cadbury Chocolate Carnival, an event which include the Jaffa Race where thousands of Jaffas are individually labelled and raced down the steep street raises approximately NZD$70,000 for charity. The event, said organisers, is certain to be a photo finish.

The event takes place on Baldwin Street with a gradient of about 35 per cent, recognised by the Guinness Book of World records as the steepest street.

Cadbury World is open to the public for tours letting groups go behind the scenes of a working chocolate factory.