Advertisement
Spice Magazine caught up with AGB Events CEO Anthony Bastic to talk about his role in putting together the second annual Parrtjima festival of light. 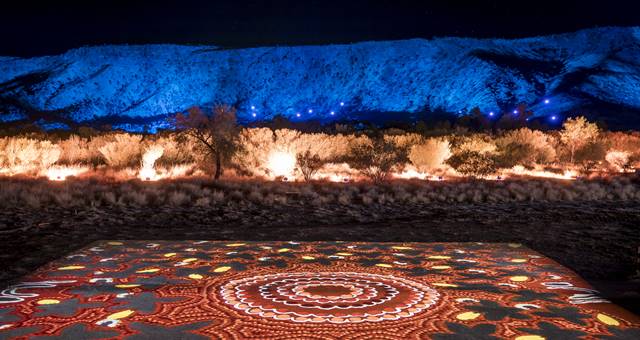 Spice Magazine caught up with AGB Events CEO Anthony Bastic to talk about his role in putting together the second annual Parrtjima festival of light.

Putting together Parrtjima, was no small feat.

But for Sydney-based AGB Events – who are specialists in using the medium of light for creative story-telling – the brief was a dream.

“I was contacted by Andrew Hopper, director of the Northern Territory Major Events Company, to develop a creative concept that would celebrate Indigenous culture through light,” says AGB Events CEO Anthony Bastic.

“My company specialises in creating and producing events that cross cultures and celebrate creativity and technology,” he says.

“And Parrtjima is one of those events that speaks to [our] core attributes.”

But Bastic wasn’t interested in curating the event, instead choosing to enlist the help of Rhoda Roberts OAM, a celebrated Indigenous art director, to curate the show.

“It has been our intention from the very early stages of planning that I would not act as curator, but that I would share my knowledge that I’ve gathered over the years and hand onto the local community.”

Rhoda is an “absolute powerhouse” in the arts scene, says Anthony.

“She is bursting with ideas and is always looking at new ways to share and tell Indigenous stories using as many technologies as possible.”

Rhoda worked closely with AGB Events and Aboriginal artists and art centres from across the Red Centre to develop the festival program, with endorsement from the Parrtjima Festival Reference Group and ongoing consultation with a wider network of respected Arrernte persons.

What resulted was a breathtaking illumination of the majestic MacDonnell ranges, a 300-million-year-old natural canvas and a series of new installations.

But the end result did not come without challenges, explains Anthony.

“As you can imagine, there are many challenges when deciding to light 2kms of mountain ranges such as the MacDonnell Ranges in Alice Springs.”

“Firstly, there is the sheer scale of creating a light show that stretches such an enormous length, coupled with lights in such a fashion that they will be able to viewed from a great distance and then be impressive enough so that the audience’s imagination is sparked,” Anthony says.

In order to get the lighting just right, AGB Events took on a collaborative approach and engaged lighting experts to help them get it just right.

“Positioning lights on the side of a mountain range poses enormous problems, we engaged a lighting company from Melbourne and worked with designer Richard Neville to realise the vision of our curator”.

When asked what his personal favourite art piece was at the show, Anthony points to a projection piece called Grounded.

“This piece features artworks created by local artists and the images are projected onto the ground, the red desert.”

“One of the reasons that I love this piece is that it provides an opportunity to showcase many Indigenous artists’ works but it is the reaction from the children who want to bathe themselves in the light, therefore bathing themselves in the art.”

“This piece not only celebrates the many talented Indigenous artists, but also showcases modern technology.”

When asked what we can expect from next year’s show, Anthony replies: “Watch this space”.

Parrtjima was held in Alice Springs at the Dessert Park from the 22nd of September to the 1st of October.