Advertisement
Emirates has announced a 23 per cent increase of capacity on Melbourne flights, following the upgrade of aircraft to Boeing 777-300ERs on services to Auckland, Kuala Lumpur, Singapore and Dubai.

Emirates has announced a 23 per cent increase of capacity on Melbourne flights, following the upgrade of aircraft to Boeing 777-300ERs on services to Auckland, Kuala Lumpur, Singapore and Dubai. 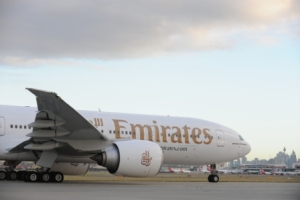 The move means not only an increase in the amount of seats available on the four daily flights – once to Auckland and three to Dubai (one direct and one each via Singapore and  Kuala Lumpur) – but an unparallel level of comfort and entertainment across all three cabins.

“Demand for Emirates’ flights from Melbourne to Europe, the Middle East, Africa and New Zealand has consistently grown year-on-year, and the continued capacity increases are a reflection of this,” said Emirates’ sales manager for Victoria, South Australia, Tasmania and Northern Territory, Dean Cleaver.

“With forward bookings looking strong for the coming year as the wider travel market recovers, the increases are coming at an ideal time for us.

“The introduction of the new B777-300ER aircraft will also create a more consistent product offering across our services from Melbourne.

“The aircraft operating the non-stop route to Dubai and the route via Singapore will feature luxurious First Class Private Suites, flat-bed seats in Business Class, and generous space for passengers in Economy Class.

“On the route via Kuala Lumpur we are offering flat-bed seats in First Class, comfortable sleeperette seats in Business Class in addition to our spacious Economy cabin,” he said.

The increase in capacity comes during a big year for Emirates, with the Dubai-based airline launching new flights to Amsterdam, Prague, Madrid and Dakar during 2010.