Advertisement
Hawaii Tourism Oceania (HTO) hosted its annual update in Sydney on Monday 20 February. Here's everything you need to know for the year ahead. 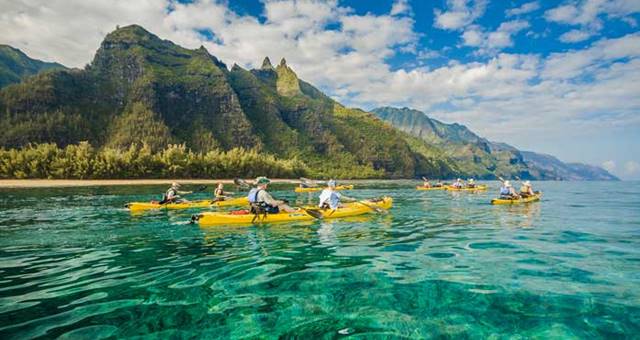 Hawaii Tourism Oceania (HTO) hosted its annual update in Sydney on Monday 20 February. Here’s everything you need to know for the year ahead.

Following on from a bumper year of arrivals – 335,753 Aussies into Hawaii in 2016 – HTO is ramping up its activity in the Australian market to attract even more people to the destination.

For the MICE industry, the focus will be on incentive groups. HTO will be inviting a group of Australian PCOs and planners up to the islands to attend the Experience Aloha trade show in June this year, followed by a famil.

HTO is exhibiting at AIME. Go and see the team at the Meet Hawaii stand 4200.

For a copy of the most recent Meet Hawaii Planners Guide, click here.

In terms of new hotels, there is plenty of action. Please see below for a hotel update:

As part of The Unbound Collection by Hyatt, a global collection of unique and independent stay experiences, the Coco Palms Resort on the east side of Kauai will begin construction in 2017. The Coco Palms Resort was originally built in 1953 with just over 20 guestrooms on grounds that were once home to Kauai’s last reigning queen, Queen Deborah Kapule Kekaihaakulou. Devastated by Hurricane Iniki in 1992, the revitalization of the 363-room historic hotel is scheduled to begin this year and slated to open in 2018.

Hawaii Prince Hotel Waikiki and Golf Club on Oahu is undergoing a $55.4 million redevelopment and rebranding project to attract the next generation of travellers. Once completed in spring 2017, the property will debut as a brand new hotel with a brand new name: Prince Waikiki. All 563 oceanfront guest rooms and suites will be transformed to enhance its guest experience. The property will have all-new dining options, a modernised lobby with elevated personalised services, a new infinity pool and improved meeting spaces.

Mauna Kea Beach Hotel
On the island of Hawaii, Mauna Kea Beach Hotel and Hapuna Beach Prince Hotel will unveil newly refreshed meeting and group function spaces, along with new promotional packages for group stays in 2017. Whether your meeting or event is for 20 people or 800-plus, both hotels have enhanced meeting spaces that offer a variety of venues.

The Pacific Beach Hotel
With a $115 million redevelopment underway, the Pacific Beach Hotel on Oahu will be transformed into a tranquil oasis in the heart of Waikiki. Design firm Rockwell Group, and architectural firms WATG and Pacific Asia Design Group, have been enlisted to re-imagine the hotel’s guestrooms and suites, as well as public areas including a 280,000-gallon lobby oceanarium and a destination pool deck with two new pools. Two new restaurants by celebrity chef Masaharu Morimoto will be created exclusively for the hotel. Following the transformation, the hotel will enter the market as Alohilani Resort at Waikiki Beach in Fall 2017.

Marriott openings
Marriott is scheduled to open Koloa Landing, Autograph Collection on Kauai in February 2017 and Marriott’s Waikoloa Ocean Club on the island of Hawaii in May 2017. Spread over 21 acres of lush tropical grounds, Koloa Landing will offer everything from 475-square-foot studios to 3,600-square-foot, four-bedroom penthouses. Additional resort features will include three lagoon pools, swim-through waterfalls, a waterslide, and a walk-through grotto. Marriott’s Waikoloa Ocean Club will overlook Anaehoomalu Bay and offer one- and two-bedroom suites, inspired by the vibrant beauty of the island and furnished with kitchenettes, washer/dryers, LED TVs, and complimentary WiFi.