Advertisement
The Business Events Council of Australia yesterday made a call for an immediate injection of $20 million in Federal funding to arrest an alarming decline in the number of conference, exhibitions and incentives visitors coming to Aus

BECA, the Business Events Council of Australia  yesterday (Monday Feb 15) made a call for an immediate injection of $20 million in Federal funding to arrest an alarming decline in the number of conference, exhibitions and incentives visitors coming to Australia.

BECA Chairman Geoff Donaghy said an immediate tax incentive was also needed to boost the domestic market and employer training in such a way that Australian companies would be encouraged to hold their business events at home rather than abroad. 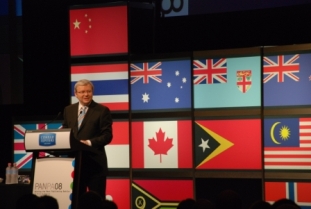 “Latest ABS figures show that visitor arrivals for business events fell by an alarming 23 per cent in 2009 over 2008, with convention numbers faring worse than overall tourism visitor numbers,” Donaghy said.

“This continues a disturbing picture that has been growing. Australia has slipped from fourth in 2000 to 14 last year in the International Congress and Convention Association’s world rankings for international conferences.” 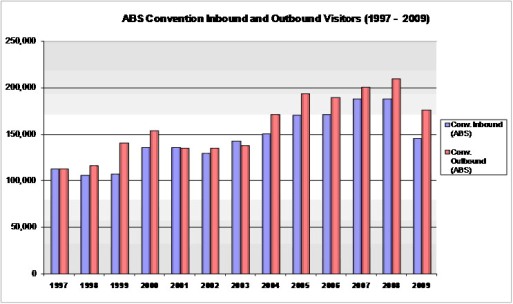 BECA’s call for the funding had been submitted to Canberra in a pre-budget request seeking a $10 million fund assisting organisations bidding to host international business events in Australia, a $5 million fund to boost attendance at events already scheduled and another $5 million to enable Tourism Australia to launch a strong overseas campaign restoring Australia’s profile as one of the world’s top 10 business events destinations.

“An immediate R&D-type tax incentive offering deductions of 120 per cent is also needed to encourage Australian companies to spend more on employee training, foster face-to-face information learning networks and stage their business events in Australia rather than abroad.” 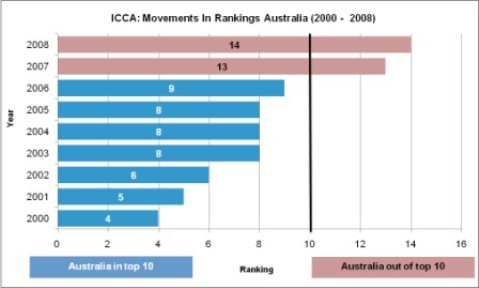 Donaghy said conference, exhibitions and other business events attracted high net worth visitors who often travel with family or friends and spent five times more on a daily basis than tourists visiting for leisure.

“Major international congresses and exhibitions not only attract thousands of overseas delegates, they also showcase Australian innovation and creativity and forge relations that are crucial to our ongoing industry and trade development.”

But this lucrative market was fiercely competitive and Australia had been losing market share at an alarming rate.

“Our Asian competitors in particular have seen the true value of business events travel and are outpowering us in marketing dollars,” he added.

“Singapore responded to the GFC by announcing a $90m tourism ‘boost’ fund aimed largely at building its business events sector.”