Advertisement
Air New Zealand is launching flights from Brisbane and Sydney to Norfolk Island after winning an Australian Government tender for air services on the popular tourist route.

Air New Zealand is launching flights from Brisbane and Sydney to Norfolk Island after winning an Australian Government tender for air services on the popular tourist route. 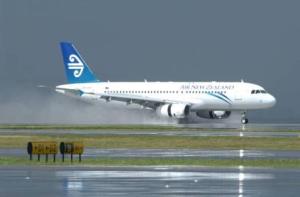 The new flights, operated by Air New Zealand’s Airbus A320 aircraft, will see a dramatic increase in the onboard offering with on-demand entertainment in every seat alongside the airline’s award-winning service.

Air New Zealand has been flying to Norfolk Island since the 1940s and the airline’s Group General Manager for Australasia Bruce Parton said the carrier was delighted to have won the tender.

“Air New Zealand has a significant presence in the Tasman market and has a long and well-established relationship with the people of Norfolk Island, having been a trusted air service provider to customers there since 1947,” he said.

The airline currently operates weekly flights between Auckland and Norfolk Island and with the new services operations on the island will be extended to five days per week.

The flights will be operated by a 168-seat, all-economy Airbus A320 and Parton said it’s the perfect size for the route.

“We are excited about the opportunity to deliver our award-winning, uniquely Kiwi experience to customers who will be travelling with us between Australia and Norfolk Island,” he said.

“Another benefit for our customers and Norfolk Island Tourism is our ability to offer dual destination travel – for example, Australian travellers will now be able to choose to visit both Norfolk Island and New Zealand on the same itinerary.

“We’re also able to leverage our strong distribution platform in Australia to assist with the ongoing promotion of Norfolk Island as a destination, and are looking forward to working closely with Norfolk Island Tourism to support these services,” he said.

Parton said there would also be opportunities to increase the flying schedule should demand pick-up during popular periods of the year.

“We will certainly look at operating additional services during peak seasons and adjusting our capacity as appropriate to meet ongoing demand,” he said.

Air New Zealand will offer its ‘Seats to Suit’ pricing on the Norfolk Island flights, which provide a range of inclusions from just a seat to Works Deluxe, which features complimentary in-flight entertainment, food and drinks.