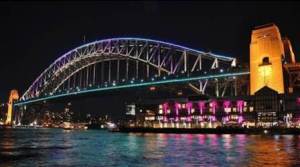 The VIVID 2013 event has proven fruitful for local hotels, with a jump in occupany rates.

General manager for Pullman Quay Grand Sydney Harbour, Belinda Paterson, said Vivid was an overwhelming success for the hotel â€“ not only in terms of room nights but in restaurant at bar profits.

â€œWe were producing double the revenue of a typical trading day at ECQ Bar and Quadrant Restaurant and the feedback from guests has been amazing. We had waiting lists for people to be seated in both the bar and restaurant every Friday, Saturday and Sunday evenings throughout the festival,â€ said Paterson.

â€œWe put together a Vivid Stay & Play package which included overnight accommodation in a suite facing the harbour, a 3-course dinner for two people delivered to the suite along with a bottle of Taittinger Champagne, which was a sellout. In fact, in-room dining throughout the duration of Vivid jumped a whopping 58.9%. Our guestrooms come with separate living rooms and fully furnished balconies which either overlook the harbour or the Botanical Gardens, so guests were keen to dine-in and watch the light show from their room.â€

As Vivid expanded its reach to Walsh Bay this year, the recently renovated Sebel Pier One Sydney benefited considerably from the increased foot traffic and with the support of key sponsors, the entire western side of the hotel was lit-up in purple lights, making it one of the key Vivid attractions.

The hotel recorded a 75% increase in food and beverage profits over the duration of the festival, while it saw a 16% increase in room bookings. The hotel set up a Moet-Hennessey Bar in the hotel lobby and also operated a pop-up bar on the Pier which served hot drinks and snacks, which proved to be a winning combination.

â€œFrom 6pm every night over the three week festival, there was a constant flow of people doing the walk from Darling Harbour to Walsh Bay, and as a result our restaurant was at capacity most nights. Adding to this, the pop up bars we initiated with the help of our sponsors had a constant line-up of people â€“ we couldnâ€™t have hoped for a better result, â€ said general manager of The Sebel Pier One Sydney, Michael Sheridan.

The Sebel Pier Oneâ€™s sister hotel, Harbour Rocks Hotel enjoyed a significant uplift in food and beverage trading as both Ericâ€™s Bar and Scarlett Restaurant traded to capacity on most nights during the festival – recording a 62% increase in sales and 21% increase in rooms sold over the same period.

According to Scott Boyes, Accorâ€™s regional general manager for NSW, Sydney as a market has grown over 5% year on year throughout the Vivid period, and for a tier-one market to perform so strongly over a traditionally quiet period, it supports an event-based strategy to drive the tourism and hospitality sector.

â€œAccorâ€™s Sydney hotels fared exceptionally well during Vivid and weâ€™re grateful to the NSW State Government, Sydney Harbour Foreshore Authority and Destination NSW for once again putting on a fantastic 3-week event over what is typically a tough time of the year for hoteliers. We remain committed to supporting governments in delivering a solid event calendar in all markets particularly over need periods.â€