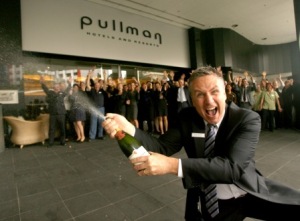 Opened as the Crest International in 1971, the hotel was a ground-breaking venue for Brisbane, bringing ‘international’ accommodation to the city for the first time. Its pioneering spirit is set to continue, as the hotel joins the world’s fastest growing 5-star hotel brand, Pullman. The once glamorous hotel is set for a major renaissance following the completion of a striking upgrade and refurbishment that will transform the interior, and re-establish it as one of the city’s leading 5-star hotels.

The $7 million upgrade will involve renovation of all the Sebel rooms to Pullman standards, the creation of an exciting new lobby and Pullman lounge, a total renovation of the hotel’ s meeting and exhibition facilities, new exterior painting and signage. Half of the rooms have already been completed, with the remainder due for completion by the end of the year. The function centre upgrade will take place in January and February 2013 to minimise disruption. 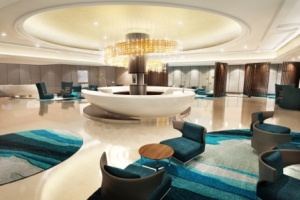 Signalling a dramatic expansion of Accor’s 5-star Pullman brand in Australia, up to seven of the former Mirvac hotels will have rebranded to Pullman by the end of 2012, which puts Pullman on track to becoming Australia’s largest 5-star network, with the portfolio expected to grow to at least 12 hotels by the end of 2013.

Chief Operating Officer of Accor Asia Pacific, Simon McGrath, said growing the Pullman brand in Australia was a key factor in the global positioning of Pullman as a premier 5-star hotel brand.

“The Pullman brand holds such a rich history and is highly regarded throughout Asia and Europe, and it makes sense for us to grow this brand in Australia where there is clear demand for quality internationally-branded hotels aimed at the corporate, meetings and upscale leisure markets.

“The rebranding of The Sebel & Citigate King George Square Brisbane is very exciting for Accor. Once the planned refurbishment is complete, the hotel will certainly rival some of Accor’s best Pullman hotels in Asia. We are investing heavily into this property and look forward to seeing our customers enjoy the benefits.”

It is fitting for such a pioneering hotel to take on the Pullman brand name, because while Pullman is the newest 5-star hotel name in Australia, it was renowned for changing the face of American overnight accommodation in the 19th century when Pullman railway carriages – known as ‘palaces on wheels’ – were introduced on to America’s rail system. With their opulent sleeping cars and fine dining carriages, they changed train travel from a mode of transportation into a luxury travel experience. Pullman is set to have a similar aspect on the Australian hotel scene as it expands rapidly across the country with new launches in 2012-13 occurring in Sydney, Melbourne, Cairns and Brisbane.

As part of the hotel’s dramatic transformation, the lobby of the Pullman and Mercure Brisbane King George Square will be completely redesigned and the 210-guestrooms in the current Sebel tower will receive a sophisticated makeover.